This is the all-new 2023 X1, the Bavarian company’s entry-level SUV — or “Compact Sports Activity Vehicle” in BMW-speak. They say compact, but the new car has grown in every direction for a model that has upsized itself significantly since its introduction as an E90-Touring-based crossover.

In addition to the new, sharper exterior and screen-filled cabin, for the US market at least, the X1 will be ditching its front-wheel-drive powertrain. All X1s sold in America will feature standard xDrive, aka all-wheel drive, with a single 2.0-liter inline-four cylinder engine available at launch. In other regions, an all-electric iX1 variant is set to go on sale at a later date, but is not expected to make it over to the states.

Honey, I Shrunk The X5

The new X1 avoids going for the out-and-out cheese-grater-stye of the X7 and instead opts for two almost-square kidney grilles. They’re still massive, make no mistake, but we suspect the onslaught of the aforementioned X7 and the XM may have mellowed our perspective somewhat.

In profile and from the front, the X1 appears to ape its X3 and X5 brothers, with a chiseled lower chin and inverted-L light signatures. The waistline tapers up in a fashion that’s a touch more dramatic than its siblings, while the lower extremities are clad in black plastic.

Moving to the rear, the roofline is extended by a prominently extending spoiler hanging over a narrow rear window. It may not be to everyone’s tastes, but together with low-profile roof rails, and side air deflectors, the 2023 X1’s Cd is a respectable 0.27.

Read: Bad News For Prospective BMW Owners — Prices On The Rise For 2023

All in all, the overall proportions lend a hint of purpose. The rear wheel arches, in particular, are more pronounced than before, accompanied by the ever-present Hofmeister Kink— although the chances of anyone treating an X1 as either a performance car or a light off-roader are rightfully zero.

But even if the fair looks are primarily superfluous, the new design is at least said to be more accommodating for passengers, with BMW claiming a noticeable increase in shoulder and elbow room for front and back seat occupants. 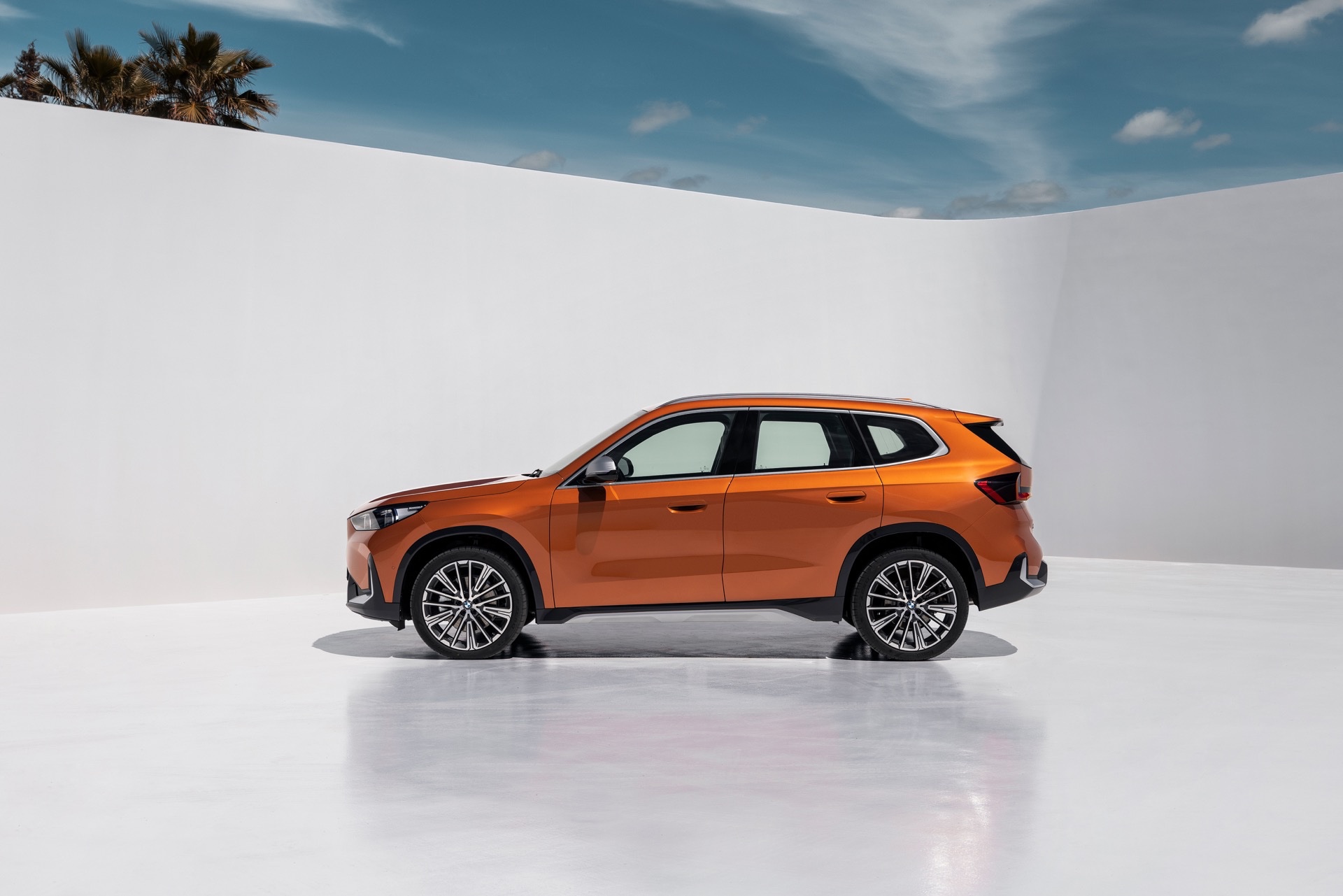 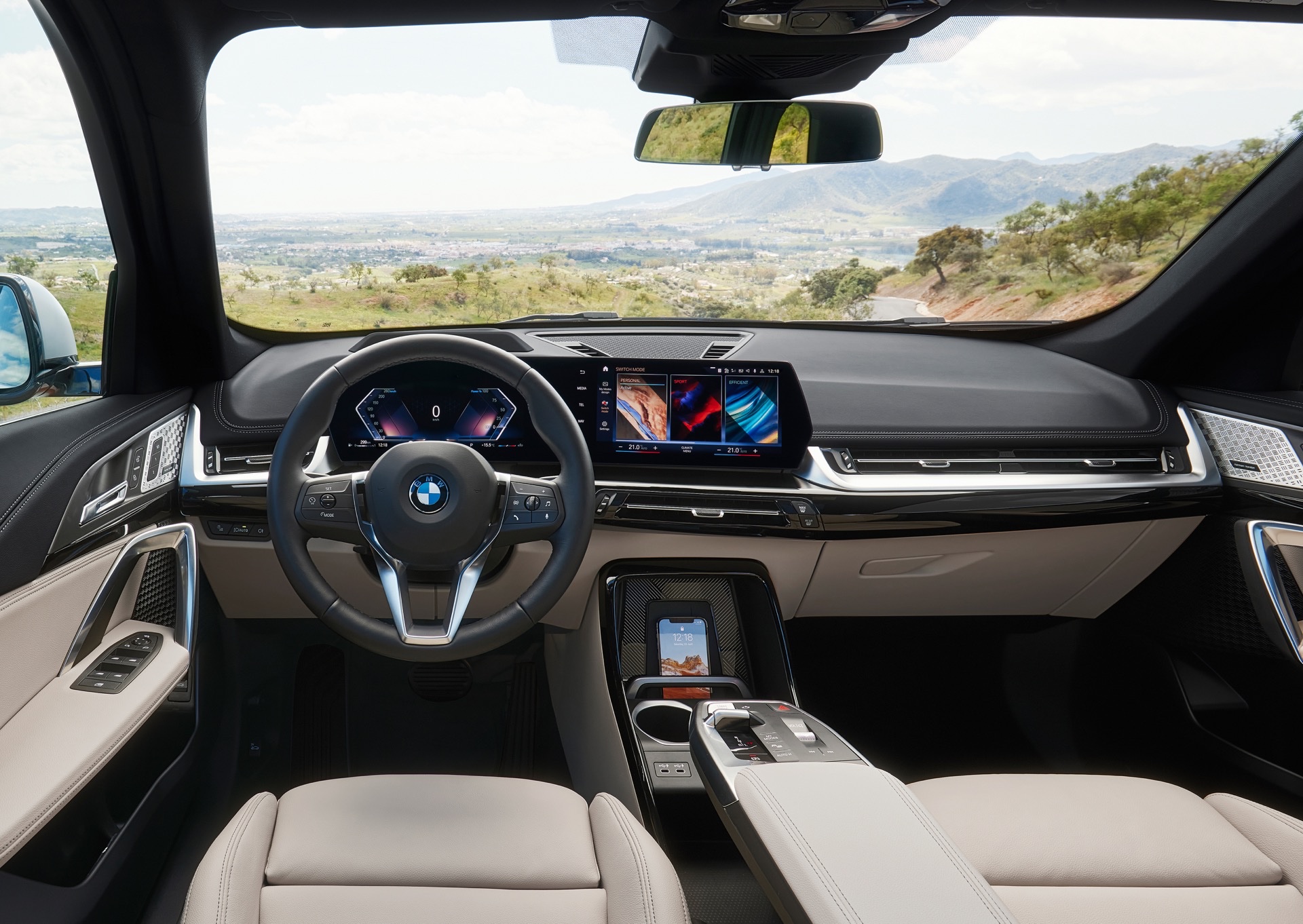 Love it or loathe it, BMW’s curved display is here to stay. It’s formed by a 10.25-inch instrument cluster and a central information display with a screen diagonal of 10.7 inches. The screen merges into a single unit behind a continuous glass
surface that curves towards the driver.

Present and correct too is BMW’s iDrive Operating System 8, which focuses on touch and control, which we figure is another way of breaking the bad news to fans of physical buttons.

One slightly puzzling feature of the 2023 BMW X1’s interior is its handling of mobile phone storage. In the center console, there’s the provision to wirelessly charge your device — nothing out of the ordinary there. The head-scratching element is introduced with a clasp that keeps the phone upright and visible to the driver and front passenger. While owners of older models may like to use their mobile phones for navigation and multimedia via a phone mount, these are typically affixed atop the dashboard so as not to avert your eyes away from the road. 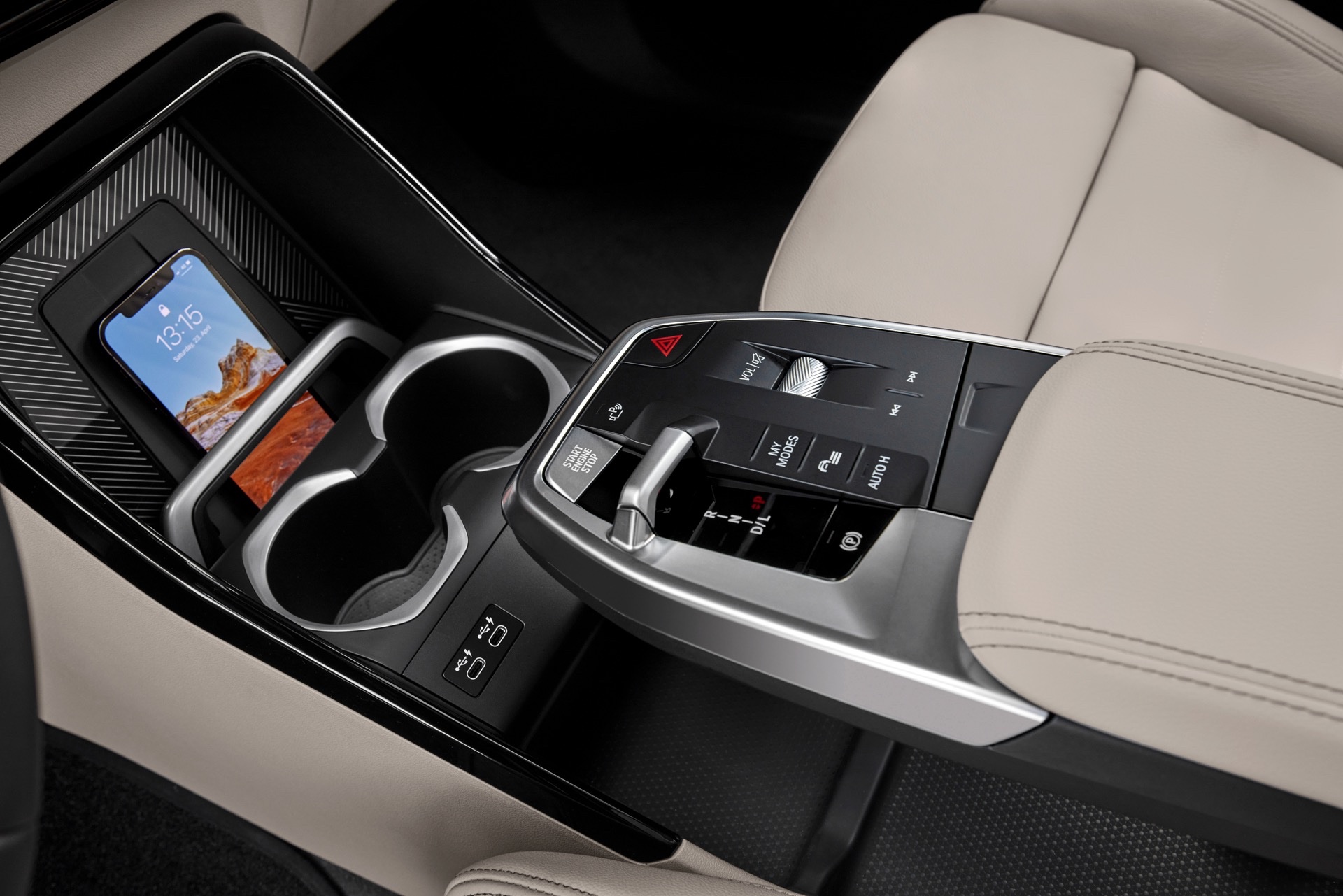 Many modern cars incorporate Carplay or Android Auto and eliminate the need for a phone to be visible at all. Why BMW has decided to perch the phone holder much lower in the cockpit — not only away from the driver’s view of the road, but behind two cupholders — is baffling. They even highlight that this feature is designed to keep the mobile device visible to the driver.

Phone storage aside, there are plenty of other cubbies that can be used to accommodate items. Practicality is extended by four USB-C ports as well as a 12V power socket in both the center console and the cargo area and standard ambient lighting. There’s a plethora of tech features, too, with BMW’s Alexa-style assistant, augmented view maps, OTA updates, a digital key, and even an interior camera. The camera can be accessed via the BMW app to check on the car’s status while you’re away or used on the move to take snapshots of the occupants on a journey.

However, fans of the time-proven method of operating your transmission conventionally will be disappointed. The X1 ditches a traditional gear stick for a toggle-style gear selector. Alongside the selector are other function switches, including the volume control — best not get those mixed up.

One Engine To Rule Them All (In America) 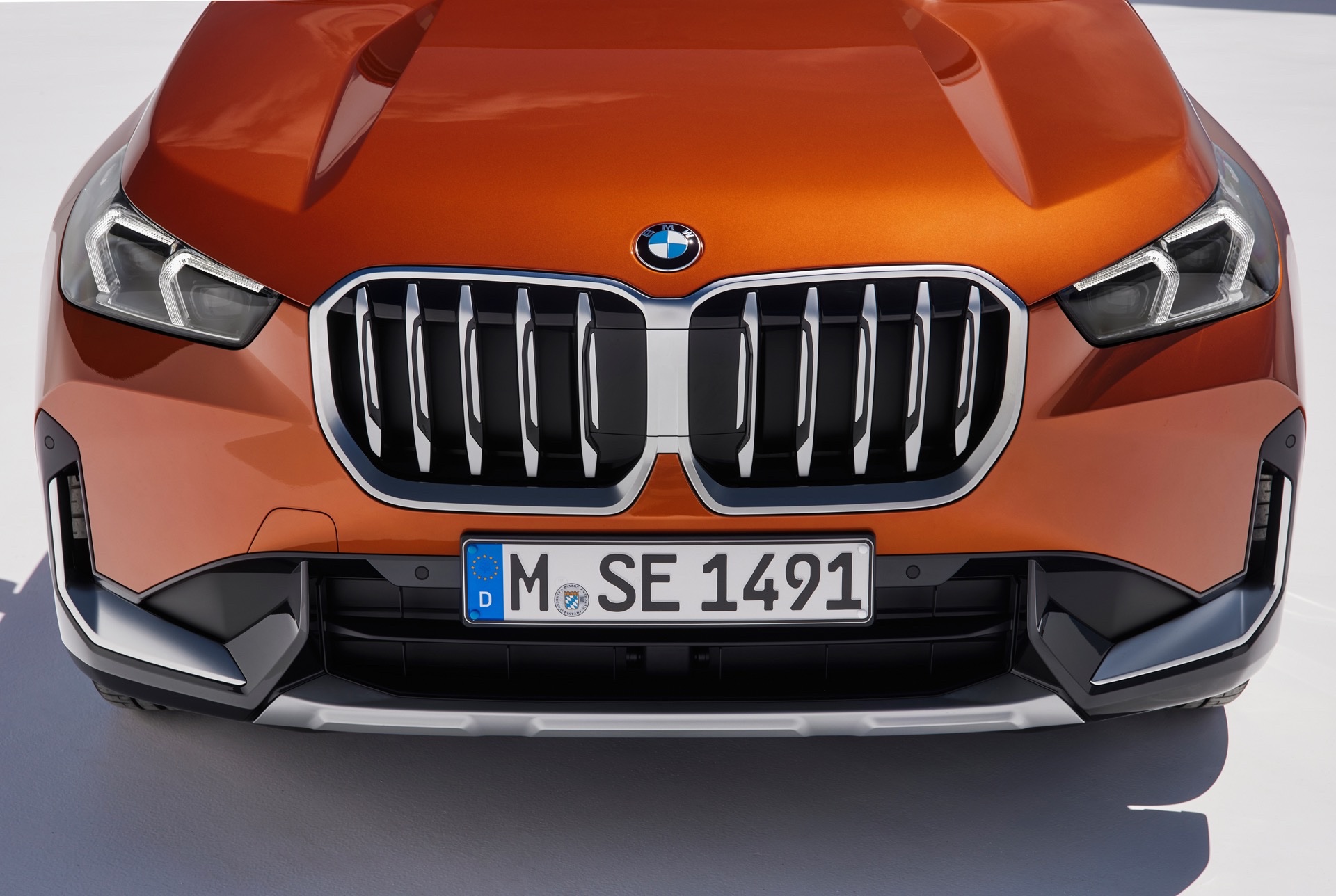 The 2023 X1 xDrive28i comes with a revised 4-cylinder 2.0-liter engine. It now incorporates a miller combustion cycle, which leaves the intake valve open during part of the compression stroke, allowing the compression to take place against the pressure of the turbo rather than the piston. In addition, there’s a new dual (direct and port) injection system and a revised combustion chamber geometry.

Power is directed to all four wheels, and the gearbox is optimized to shift better according to your route topography. That means it’ll hold gears if you’re going uphill, and coast if you’re going downhill. M Sport package-equipped vehicles get paddle shifters, with a “Sport Boost” function that optimizes powertrain and chassis settings for “the most immediate acceleration possible” in addition to standard 18-inch wheels, or optionally available 19-inch and in a first for the X1, 20-inch wheels with runflat tires. 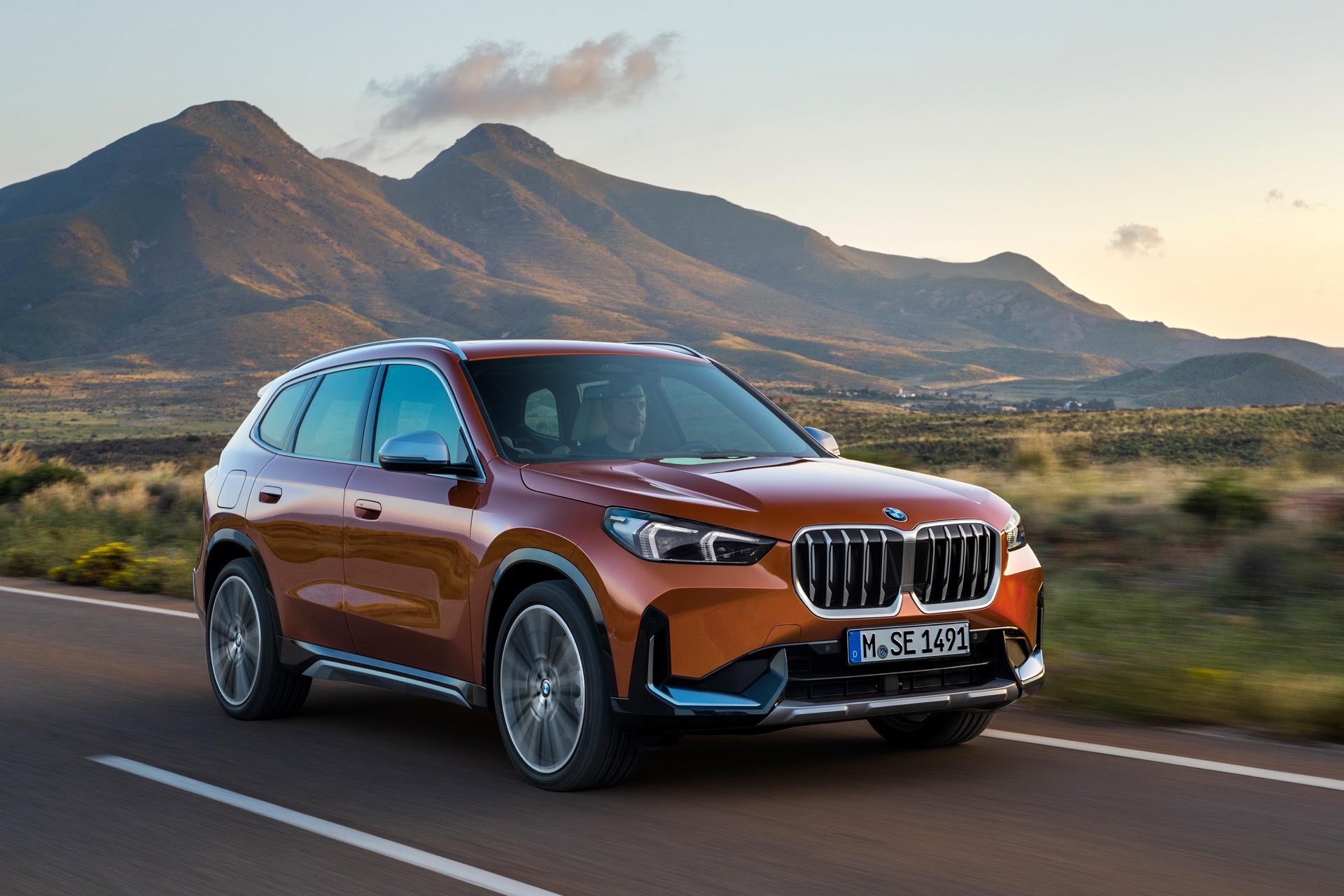 It’s often impossible to get through a BMW press release without mentioning the subject car’s sporting intent. But, while the X1 is the brand’s entry-level crossover, there may be more credibility to that claim than meets the eye — and not just because the front-wheel drive configuration has been ditched.

In addition to the optional adaptive M suspension — a first for the 2023 BMW X1 xDrive28i, dropping the ride height by 0.6 inches and adding a quicker speed-sensitive steering rack — BMW says that they’ve developed the standard front and rear axle components to Mitigate torque steer and save six pounds in weight. 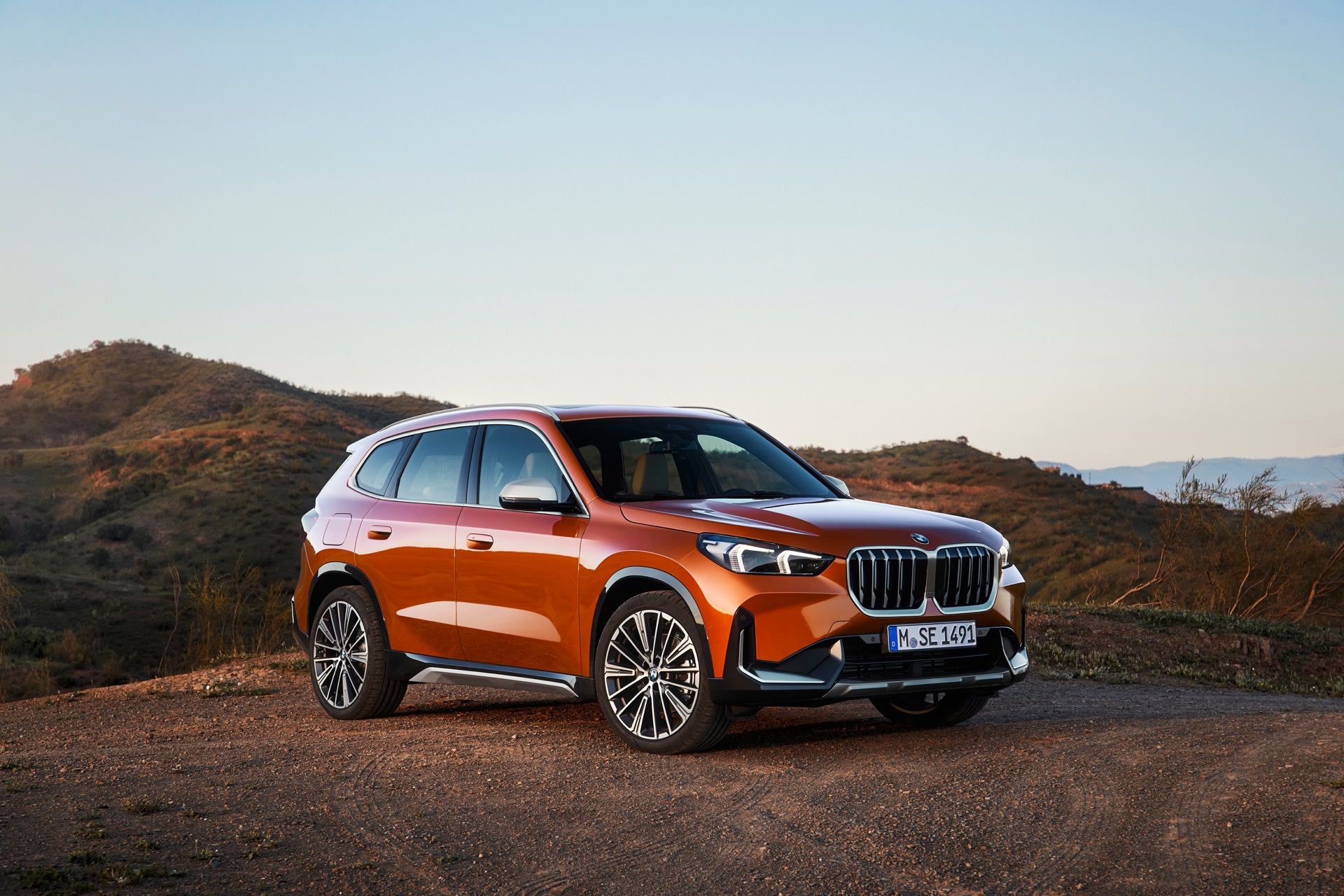 The new BMW X1 also now comes with near-actuator wheel slip limitation, something which is said to be unique in its segment. It allows traction control to be integrated into the engine management, meaning corrections can be applied up to ten times faster.