Mid-size trucks have typically played second fiddle to their larger and more capable counterparts, but that’s no longer the case as automakers are getting serious about the once neglected segment.

That’s readily apparent after taking a look at the 2023 Chevrolet Colorado, which is built around the idea of ​​more. More power, more capability, more innovation, and more technology.

Nearly a decade has passed since Chevrolet introduced the second-generation Colorado at the 2013 Los Angeles Auto Show. Since then, trucks have embraced a rugged aesthetic and the model follows suit as soft curves have been replaced by sharp lines and a more muscular design.

The 2023 Colorado incorporates some Silverado DNA, but it’s not overwhelming and this allows both trucks to have their own unique identity. Speaking of which, Chevy’s mid-sizer has slender headlights and a distinctive grille with a single bar that flows into the front fascia.

Moving further back, designers gave the truck a bulging hood and Silverado-esque fenders. They’re joined by a more traditional beltline as well as a modern rear end with a corner step bumper.

The Colorado is outfitted with a 5′ 2” bed that features eight cargo tie-downs, two motorcycle/bicycle tire grooves, and an assortment of pockets for holding 2x6s and 2x8s to allow for multi-level storage. Other highlights include an available 110-volt outlet and a tailgate that stops midway down to aid in transporting longer items such as sheets of plywood or OSB.

The tailgate also houses one of the Colorado’s more interesting features. We’re talking about an integrated storage compartment, which resides on the inside of the tailgate’s lower half. To access it, owners simply put the tailgate down and push some releases to reveal a secure, watertight compartment that measures 45 inches (1,143 mm) wide and 4 inches (101 mm) deep. Besides holding tools and equipment like tow straps, it can also function as a cooler.

While the Colorado looks good, variety is no longer the spice of life as the 2023 model will be offered exclusively in a crew cab configuration with a short bed. That’s disappointing as the outgoing model offered an extended cab long box as well as crew cab variants with short and long beds.

A Modern And Relatively High-Tech Interior 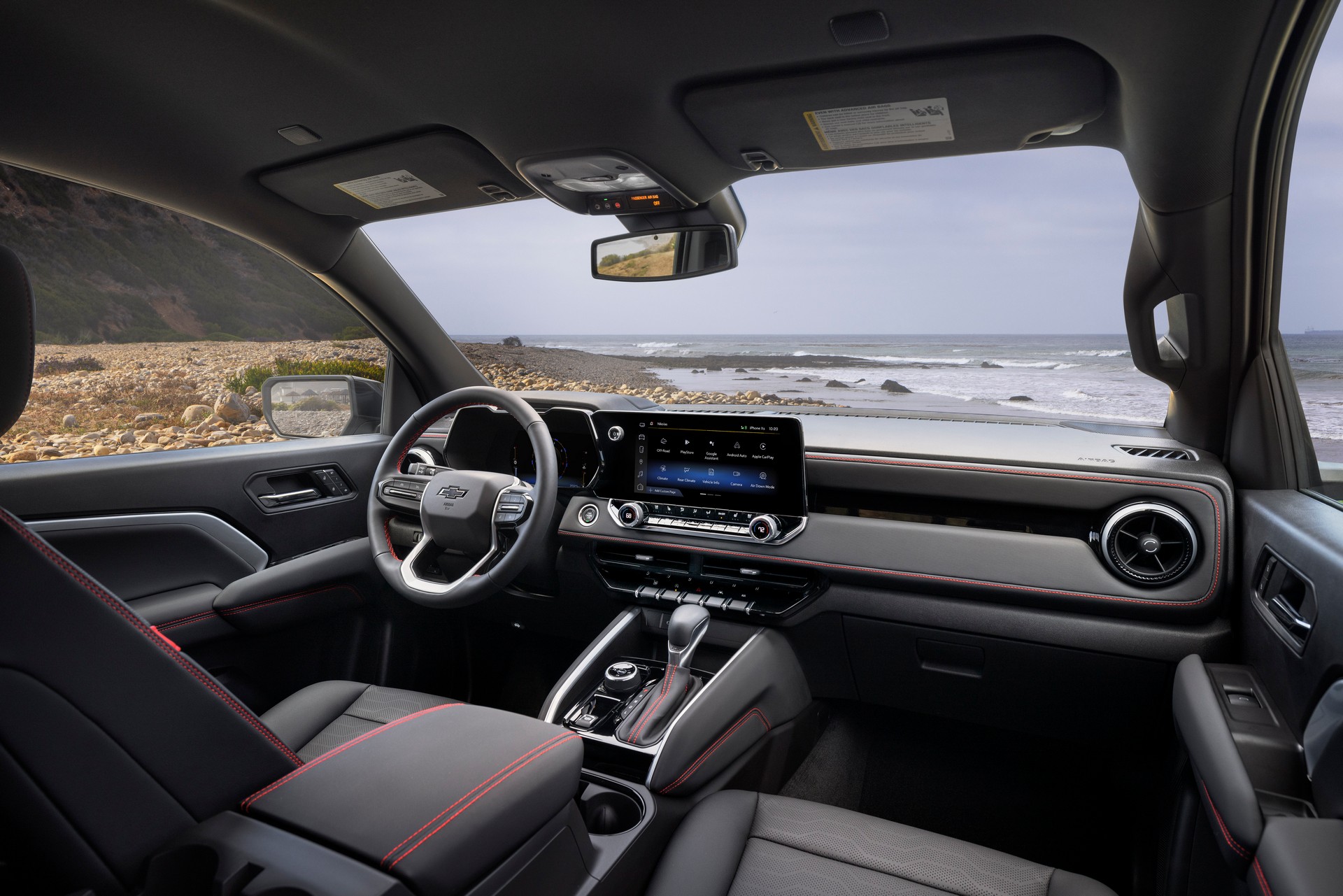 Chevrolet interiors have come a long way in the past decade and the 2023 Colorado is a beneficiary of the company’s focus on “elevated” design. While fans should keep their expectations in check, the model is decidedly tech-forward as it comes standard with an 8-inch digital instrument cluster and an 11.3-inch infotainment system with available Google integration.

Buyers will also find a new off-road performance display, which is essentially an infotainment app that provides real-time vehicle information. There is an assortment of settings including a terrain readout that provides pitch, roll, and tire pressure information. Drivers can also opt for a Baja display, which shows g-force, transfer case status, and a wheel slip indicator. 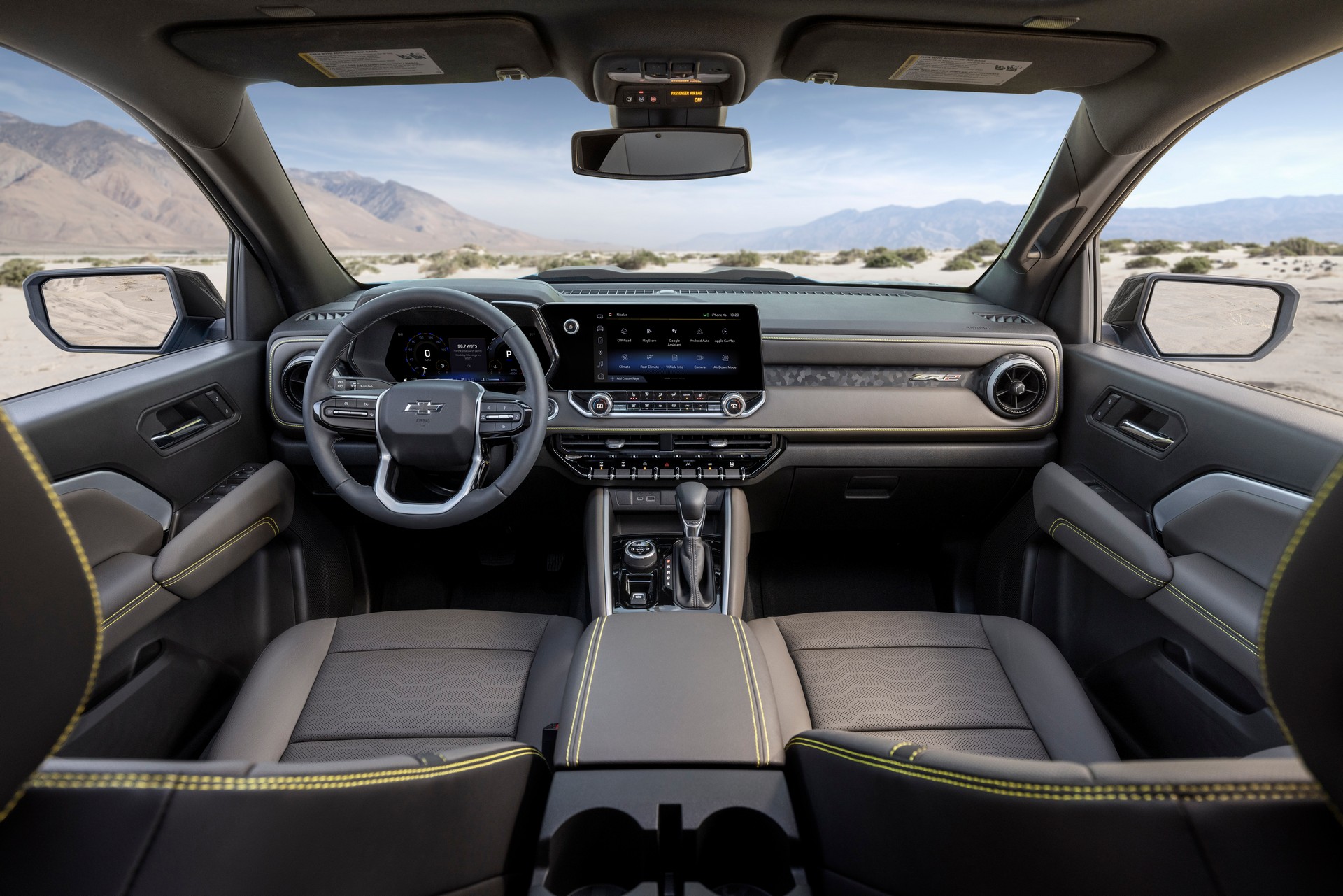 Putting the screens aside, buyers will find a modern dashboard with circular air vents that recall those found on the Camaro and Blazer EV. They’re joined by a new center console, which features a friction hinge that enables the lid to stay open at any angle.

In terms of equipment, the entry-level WT is pretty basic but it features remote keyless entry, a six-speaker audio system, and rear under-seat storage. Higher-end variants go from there and the Z71 features cloth/leatherette seats with red contrast stitching. The ZR2 goes the extra mile with heated front seats and eight-way power adjustment on the driver’s side.

An assortment of options will be available including a wireless smartphone charger and a dual-zone climate control system. Buyers can also get a sunroof for the first time in a Colorado. 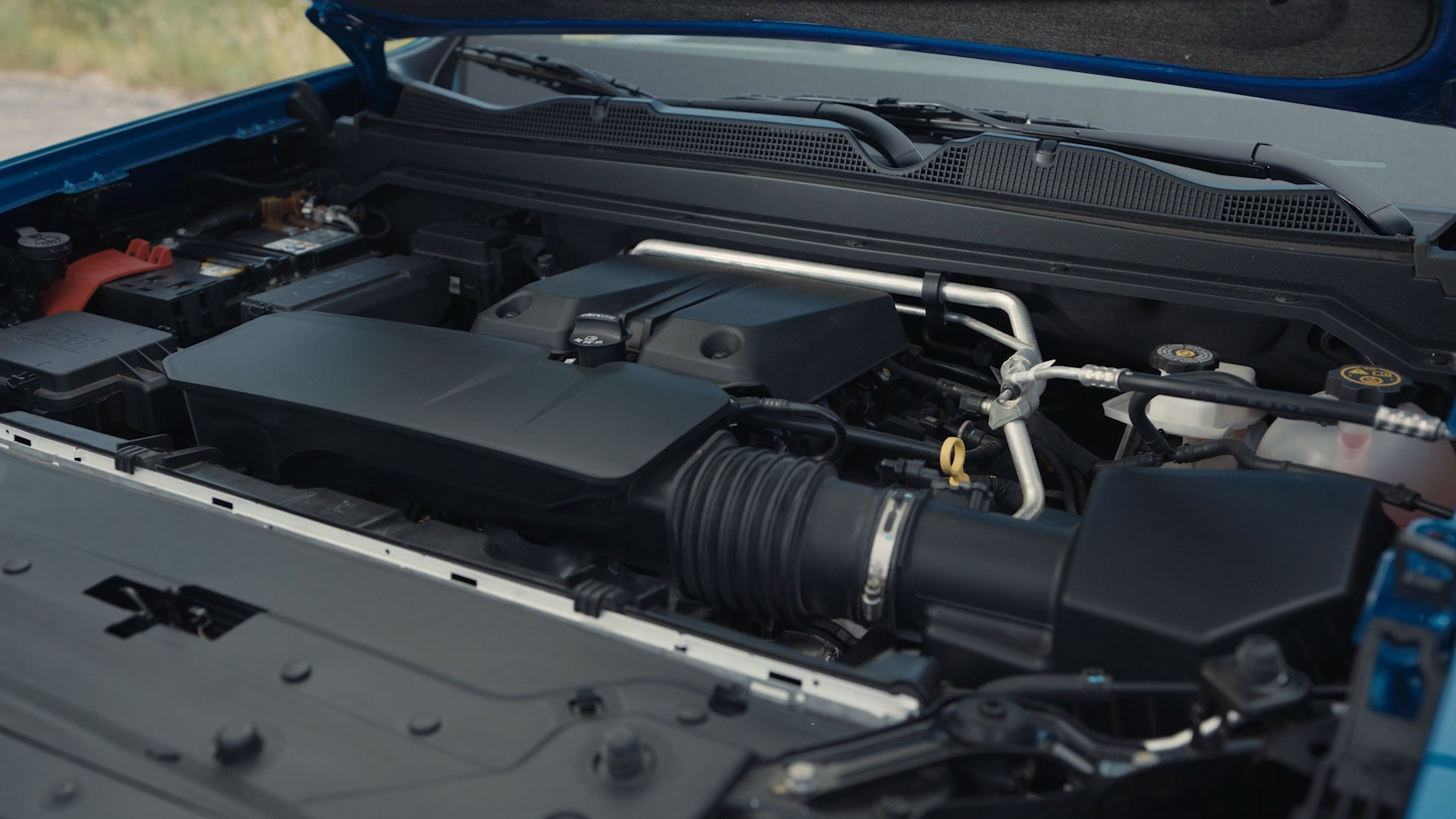 Under the hood, buyers will find a new turbocharged 2.7-liter four-cylinder that is shared with the larger Silverado. 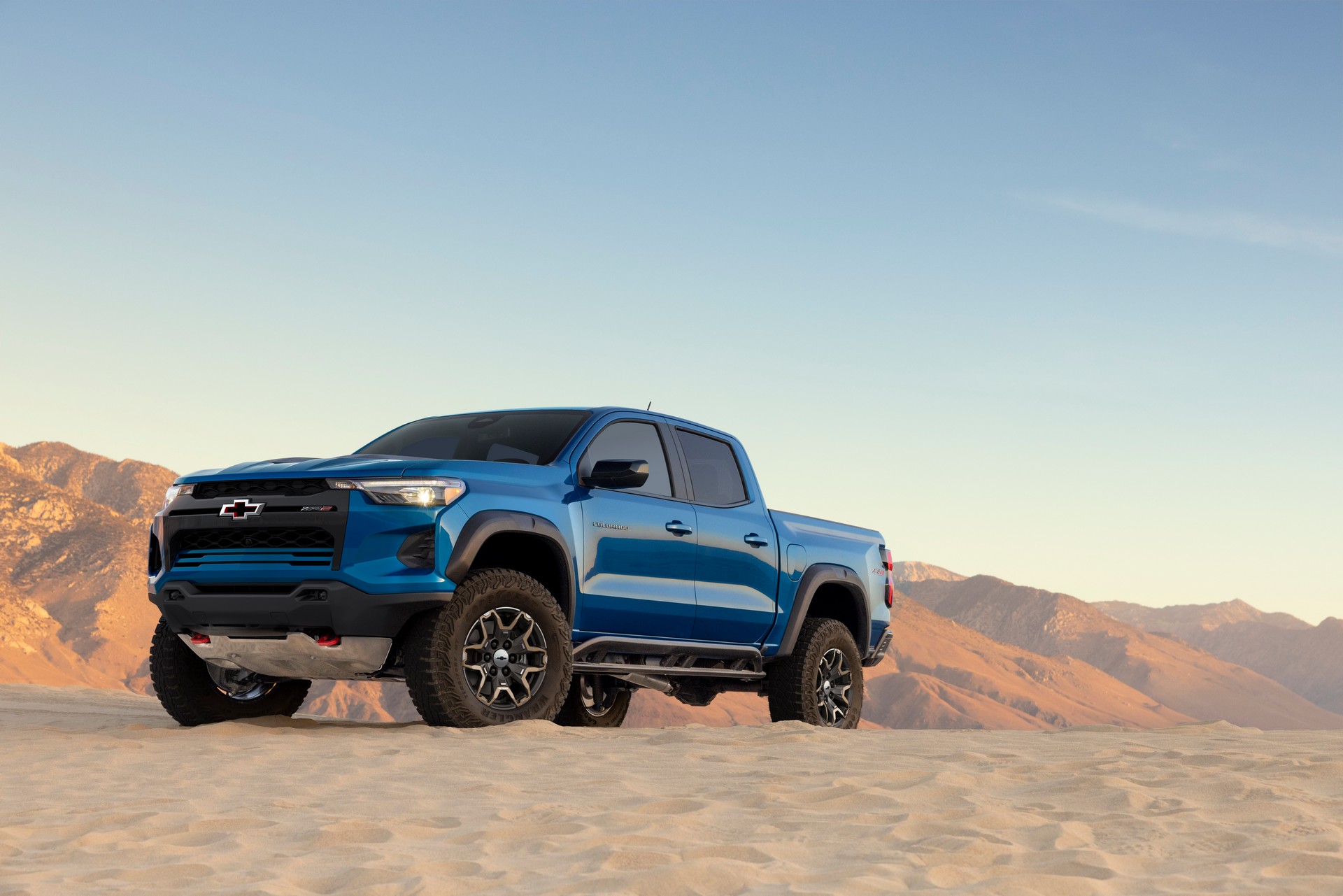 Regardless of which version is selected, all three engines are paired to a second-generation eight-speed automatic transmission. It promises smoother shifting and quicker downshifts.

Chevrolet was tight-lipped about fuel economy during a media briefing yesterday, but the engine runs on regular gasoline and enables the larger Silverado to return 19 mpg city, 22 mpg highway, and 20 mpg combined. Sadly, the company seemed to cast doubt on the return of the diesel engine as officials described the turbocharged four-cylinder as the “perfect blend” of all three previous engines. 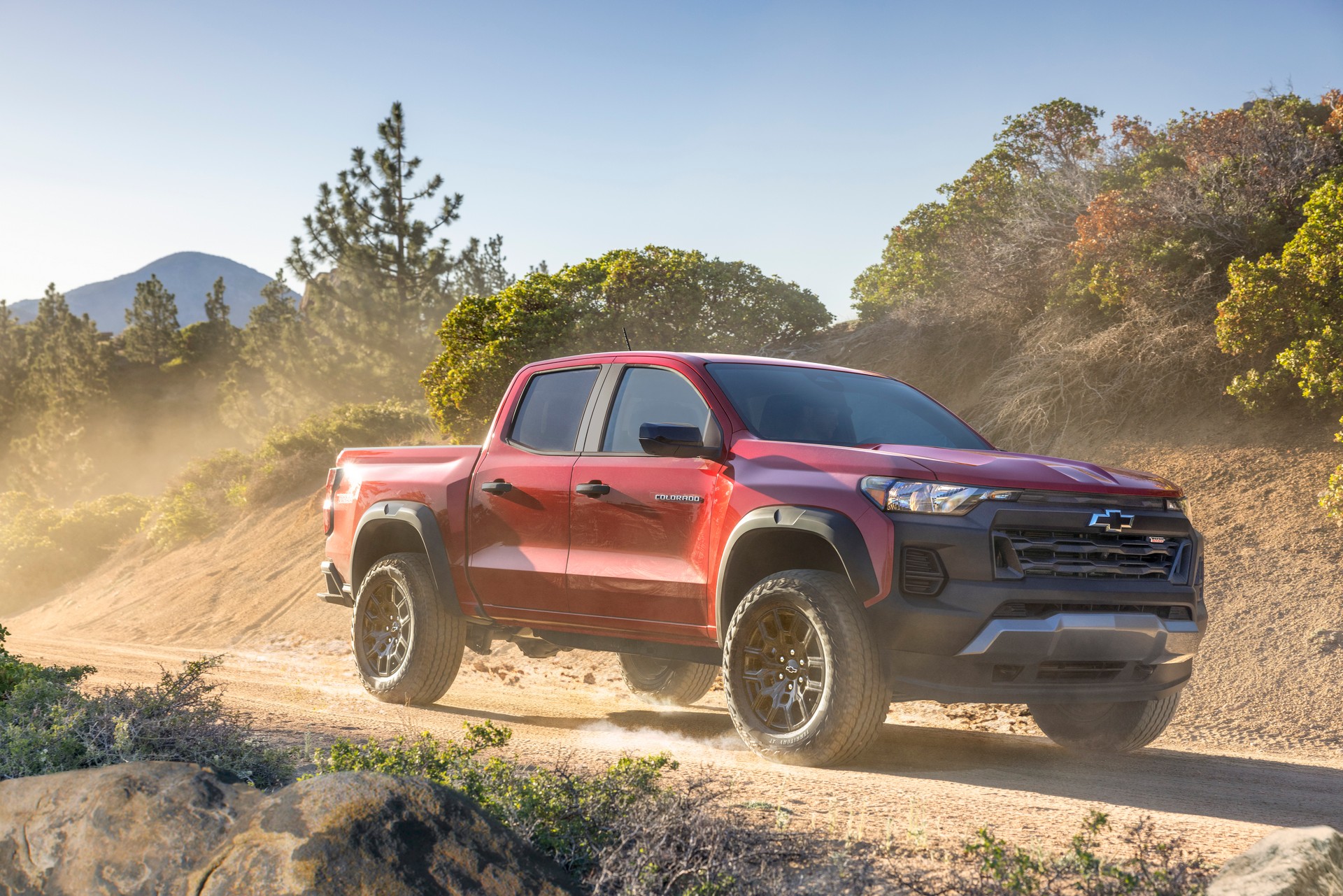 The 2023 Chevrolet Colorado rides on a new platform that features a wheelbase spanning 131.4 inches (3,338 mm) for an increase of 3.1 inches (79 mm). Unfortunately, this doesn’t translate into a more spacious cabin as front seat legroom only climbs 0.2 inches (5 mm) while rear-seat legroom surprisingly falls 1.1 inches (28 mm).

Chevy didn’t say much about the architecture, but it shares some of the best items with the outgoing pickup including part of the frame. However, officials contend it’s all-new and is made with different tooling.

Chevrolet focused on increasing off-road capability for this generation and the new Trail Boss variant features a 2-inch (51 mm) lift kit, four-wheel drive, and a wider track than the WT, LT, and Z71. They’re joined by a limited-slip differential and 18-inch aluminum wheels wrapped in 32-inch all-terrain tires. This gives the truck 9.5 inches (241 mm) of ground clearance as well as approach, departure, and breakover angles of 30.5, 22.4, and 21 degrees. 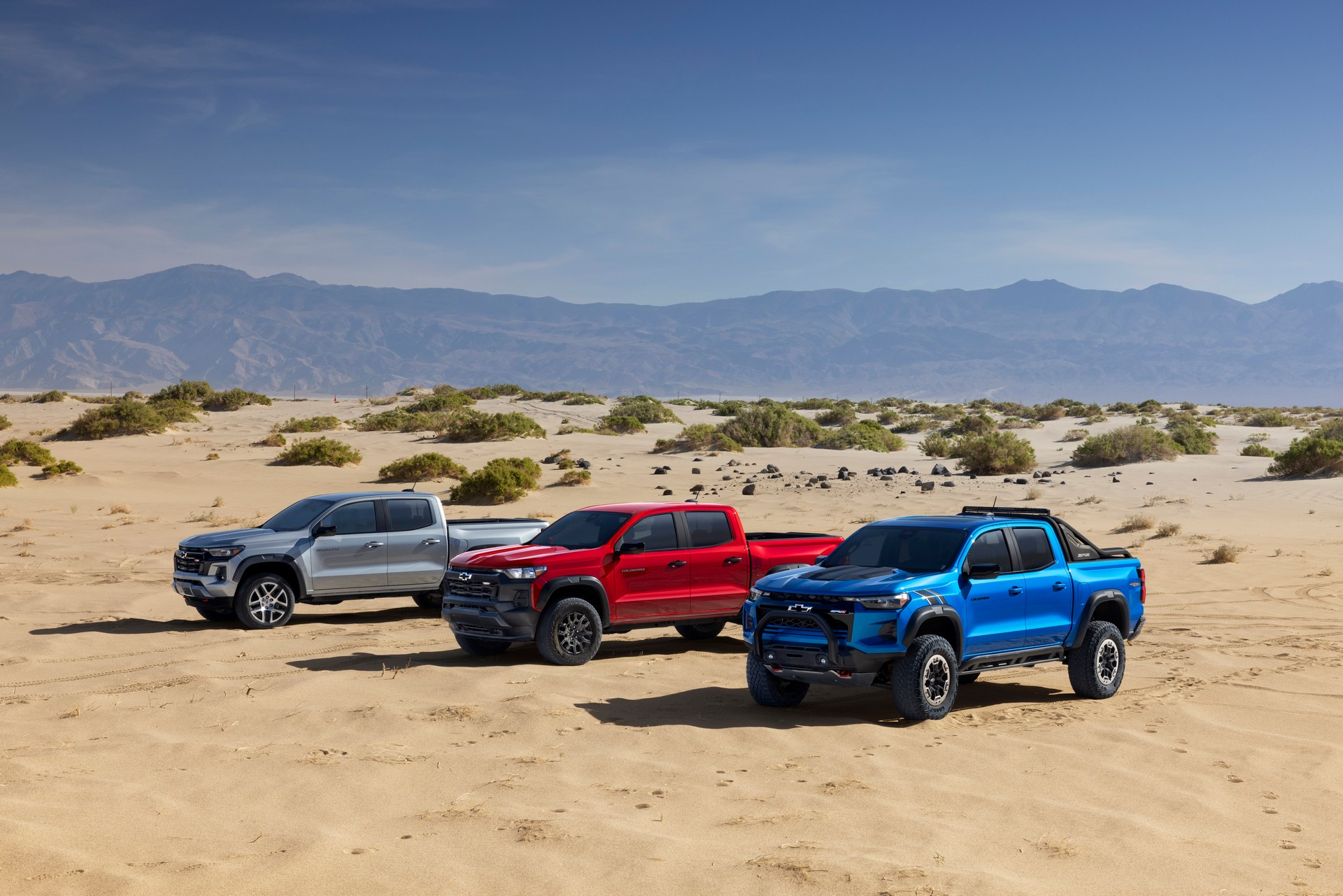 Buyers looking for something more extreme can upgrade to the Colorado ZR2. It features a 3-inch (76 mm) lift, Multimatic DSSV dampers, 33-inch tires, and 10.7 inches (272 mm) of ground clearance. The off-roader also has unique bumpers, which help to give the model approach, departure, and breakover angles of 38.3, 25.1, and 24.6 degrees. Those numbers largely trail the Jeep Gladiator Rubicon, but they’re pretty impressive for a mid-size pickup.

Speaking of off-roading, the Colorado offers up to 10 different camera views including the segment’s first underbody camera. It enables drivers to see obstacles underneath them, so they can easily avoid them or line their tires up on them.

Depending on the trim, buyers will find up to five different drive modes known as Normal, Tow/Haul, Off-Road, Terrain, and Baja. The first three are self-explanatory, but Terrain mode is designed for low-speed rock crawling. Baja mode is effectively the opposite as it’s for “high-speed desert running.” 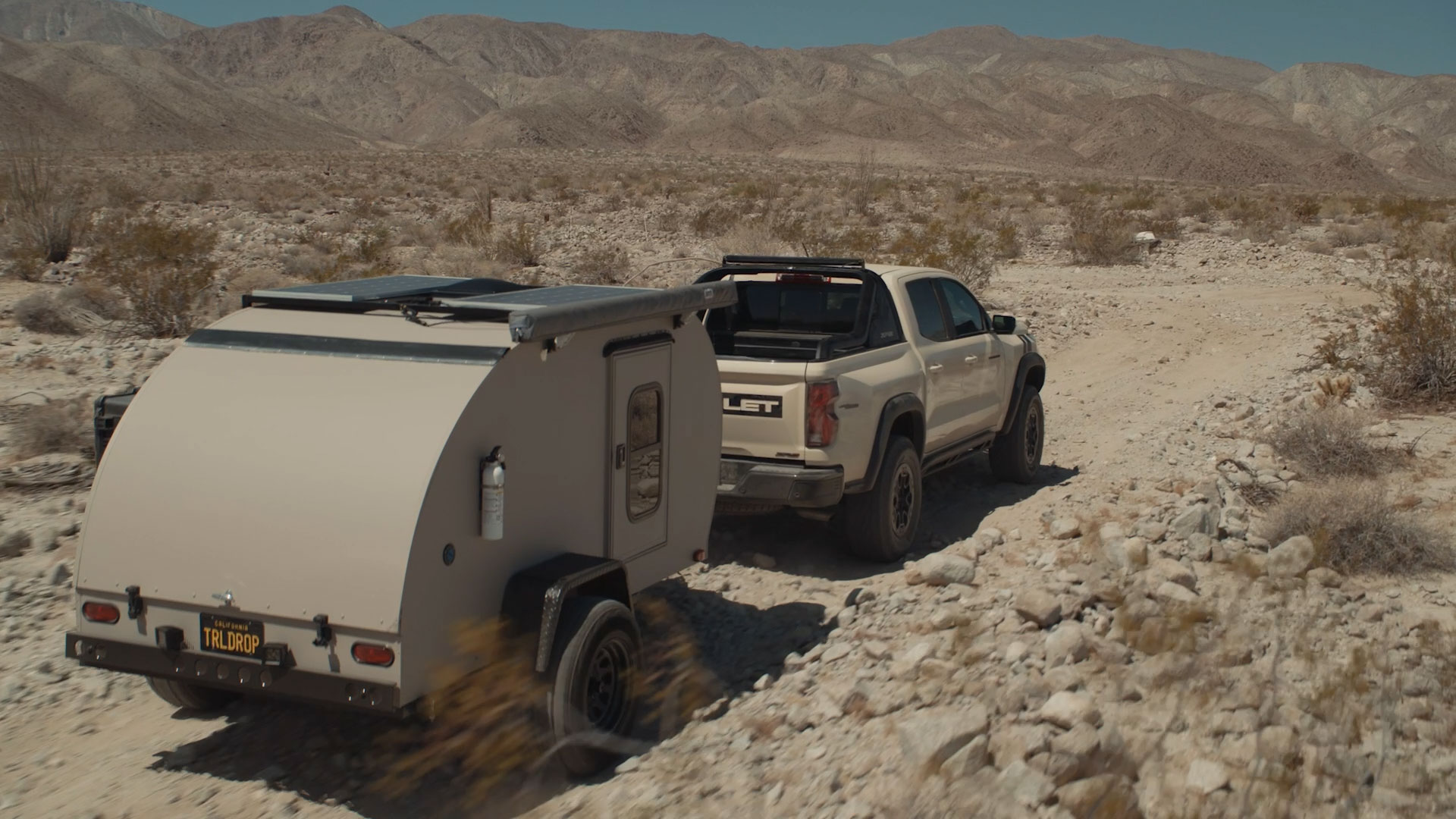 On the topic of towing, Hitch Guidance now comes standard and it provides a camera view with a guideline to help drivers connect to a trailer, boat, or camper. Furthermore, Hitch View and a Trailering app are new additions for 2023. 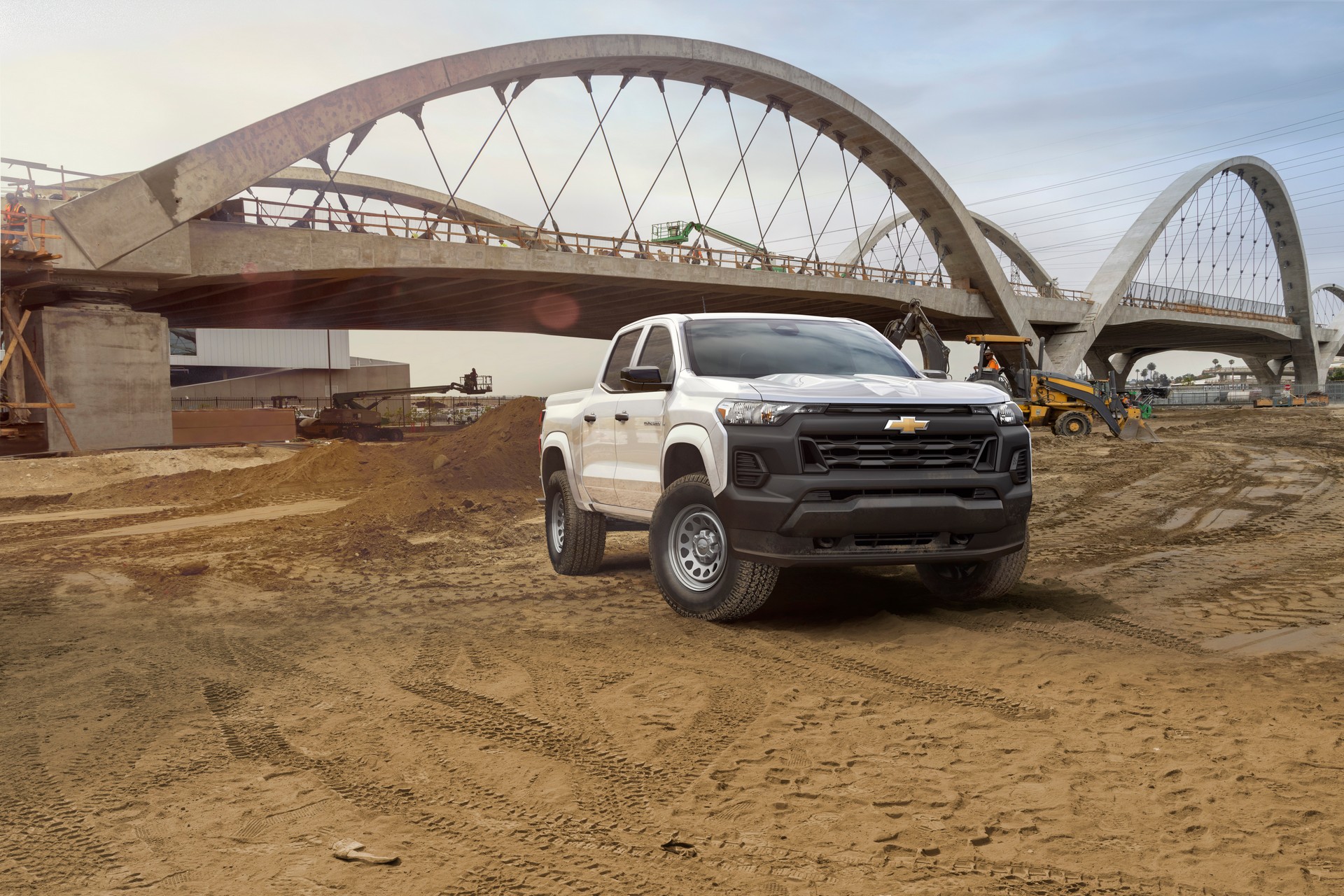 The Chevrolet Colorado will be built in Wentzville, Missouri, and will arrive at dealerships in the first half of 2023. Additional details will be announced closer to launch, but it’s clear the redesigned truck is a big leap forward.