The all-new 2022 Mercedes-Benz C 300 is a departure from any previous C-Class. No more is it the entry-level sedan that it once was. Now, it’s imbued with a bevy of advanced technology, more space, and a much more streamlined lineup.

Gone are the trio of engine options offered on the previous generation in lieu of a more powerful version of the 2.0-liter mild-hybrid four-cylinder that served as the base engine last year.

The wheelbase has been stretched by about an inch and the car is 2.5-inches longer overall. Over the course of a week with the C 300, we found that those changes make it better in person than on paper.

From the outside, the C 300 very clearly shares some of its most important design cues with its larger S-Class sibling. The headlight and front fascia treatment are nearly identical. The lower grille sections are similar and while the C 300 differentiates itself with prominent power bulges in the hood, it shares the same sharp creases where the hood blends down toward the fender. The belt lines and tail lights continue to share DNA so much so that the C 300 is really closer to the S-Class in terms of design than ever before.

The 19-inch five-spoke wheels on our test car provide a more athletic appearance than most will find on the S-Class but that’s good because the C 300 is meant to feel more agile both by external design and from behind the wheel. Unlike the brand’s new all-electric EQS, the C 300 features what Mercedes calls a ‘cab-backward’ design with a long hood and a short rear trunk space. While our car was not equipped with it, an AMG package adds a rear diffuser, performance brakes, and a sports suspension along with other subtle visual changes to the exterior. 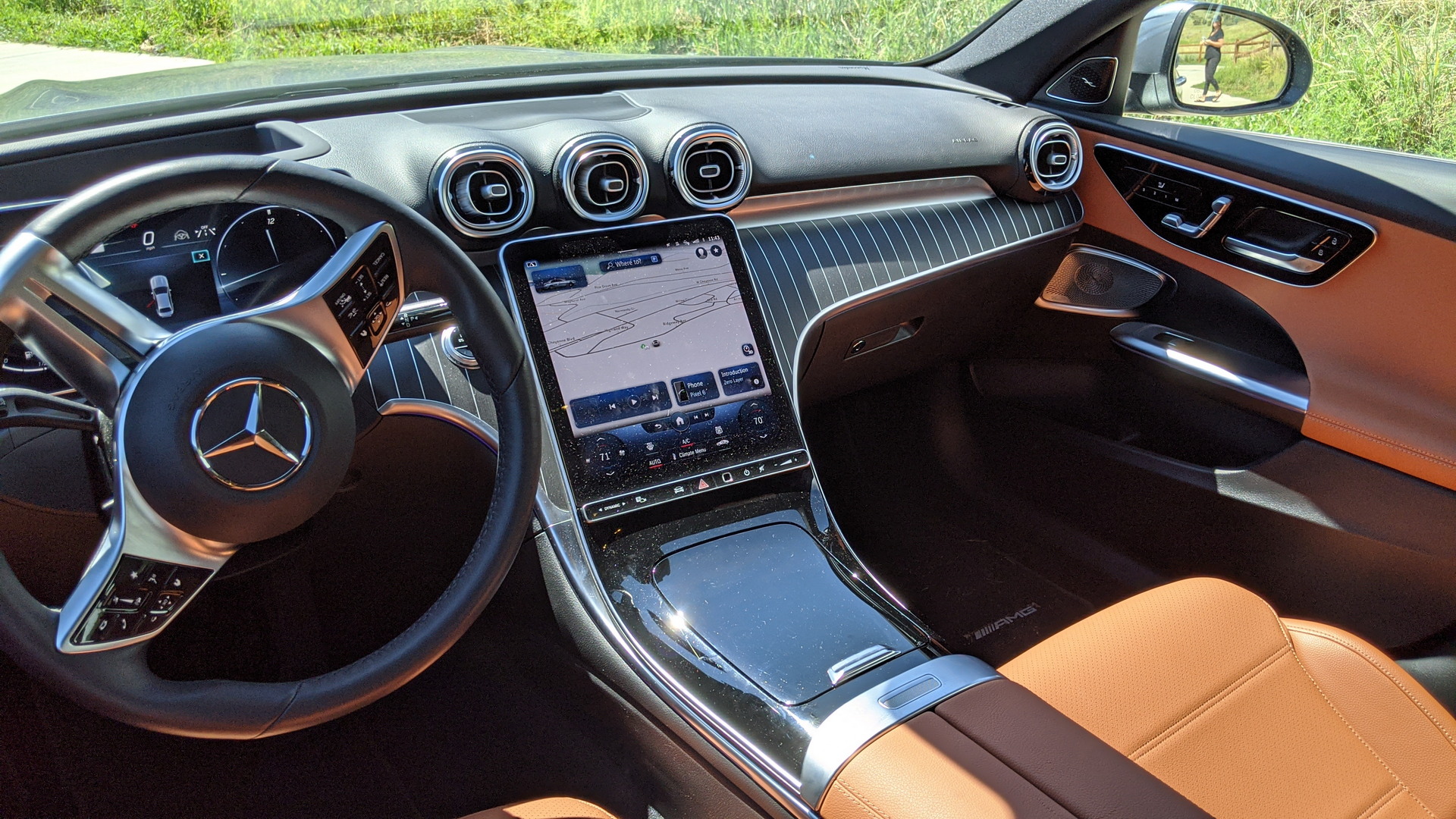 Similarly to the exterior of the C 300’s design, the interior borrows heavily from the flagship in the family. A new progressive interior features a prominent dash with no less than six different patterns available. Adding to that are 11 different upholstery choices that span from simple black MB-Tex (the brand’s name for faux leather) to “Power Red/Black” leather.

As has been the case for some time now, seating controls are found on the door panel and they work well. Despite my slightly above-average height (6’6), I found it fairly easy to get comfortable despite the fact that the top of my hair was just barely grazing the headliner. Manually-adjustable headrests for the front seats played a role there. If we could change the front seats at all we’d set them into the car a little lower. 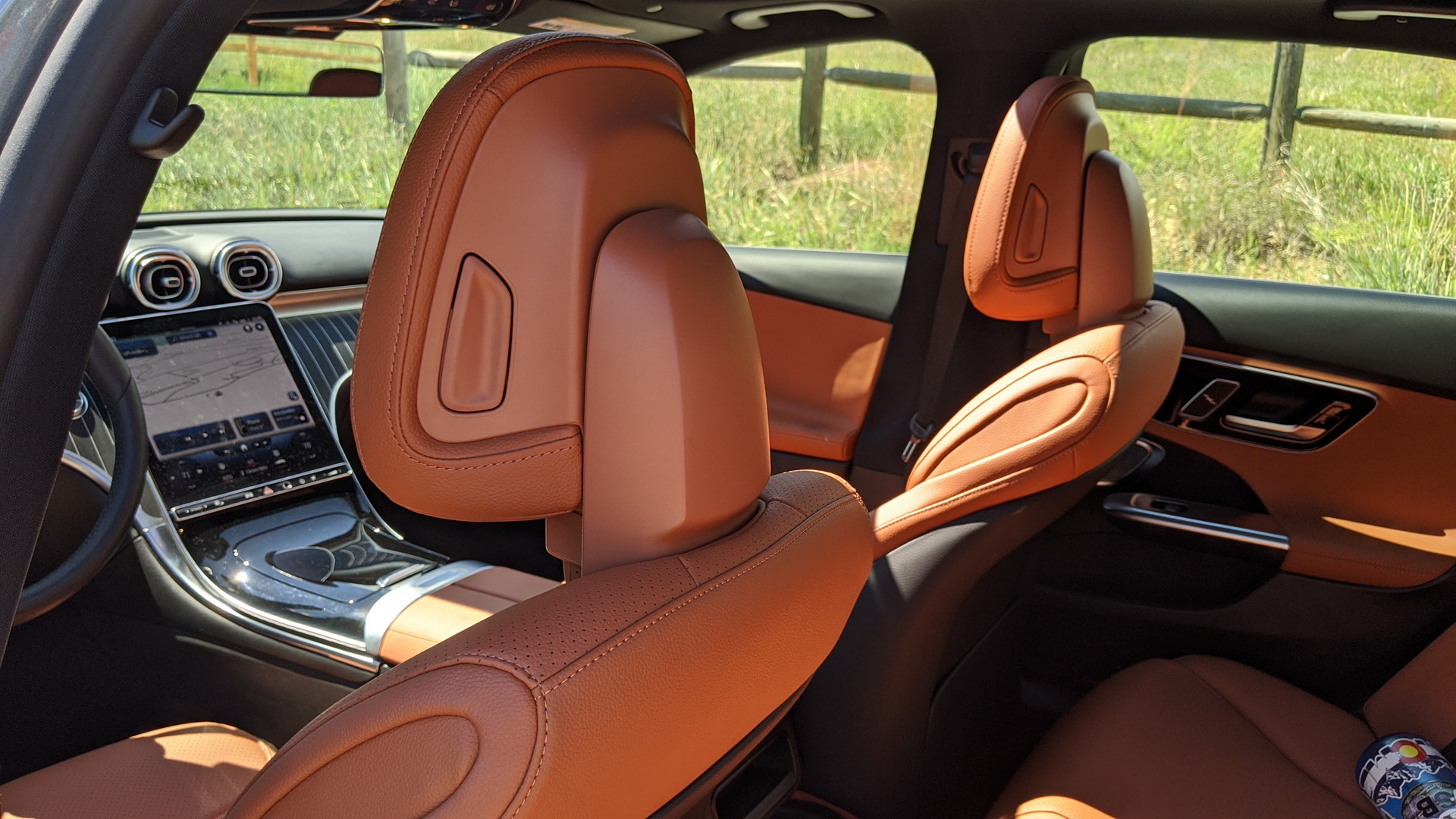 The rear seats aren’t as comfortable for a person of my size but average-sized adults can survive back there for most trips without fuss. We really wouldn’t recommend trying to fit five adults in this car though. The ‘cab-backward’ design looks good and sure, there’s more space than in the previous generation, but not by much.

Still, the overarching theme of the C 300s interior is one of sincere luxury and quality. The switchgear feels fantastic in everyday use from the climate vents that feel snug but placeable to the paddle shifters that offer a satisfying click when pulled. It’s not all perfect, though. The piano black plastics grab and hold onto fingerprints and smudges and the touch-capacitive buttons and sliders are a whole different topic. Let’s get into that. 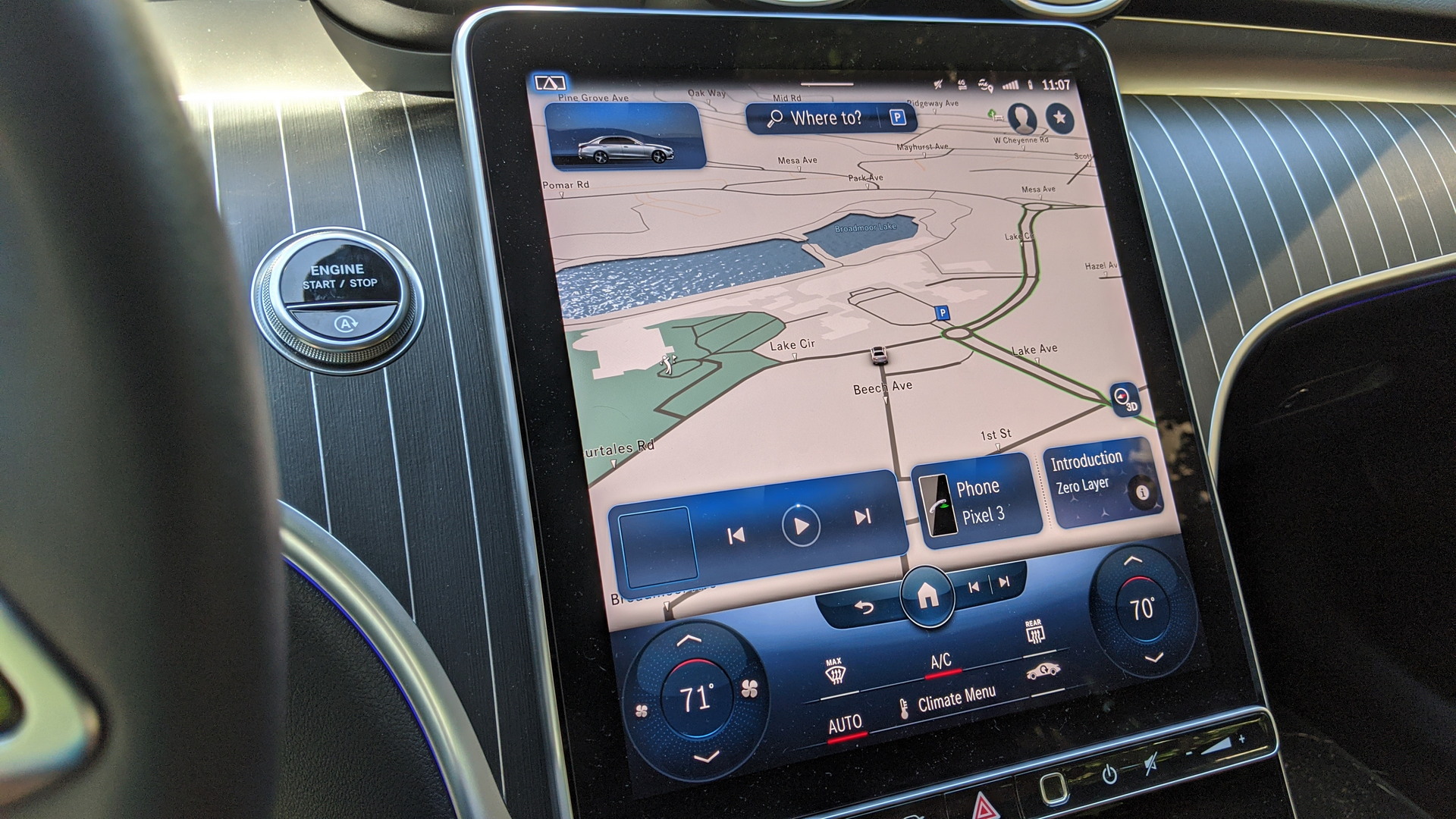 Staring back at the occupants of the C 300 are two screens. Directly ahead of the driver is a 12.3-inch digital instrument panel. It’s bright, rectangular, and easy to understand in practice. The central infotainment screen is very slightly angled towards the driver but can be seen and manipulated by the passenger with ease. It also looks great and offers an almost stunning array of features and options. Unfortunately, manipulating the system isn’t nearly as straightforward as it could be. 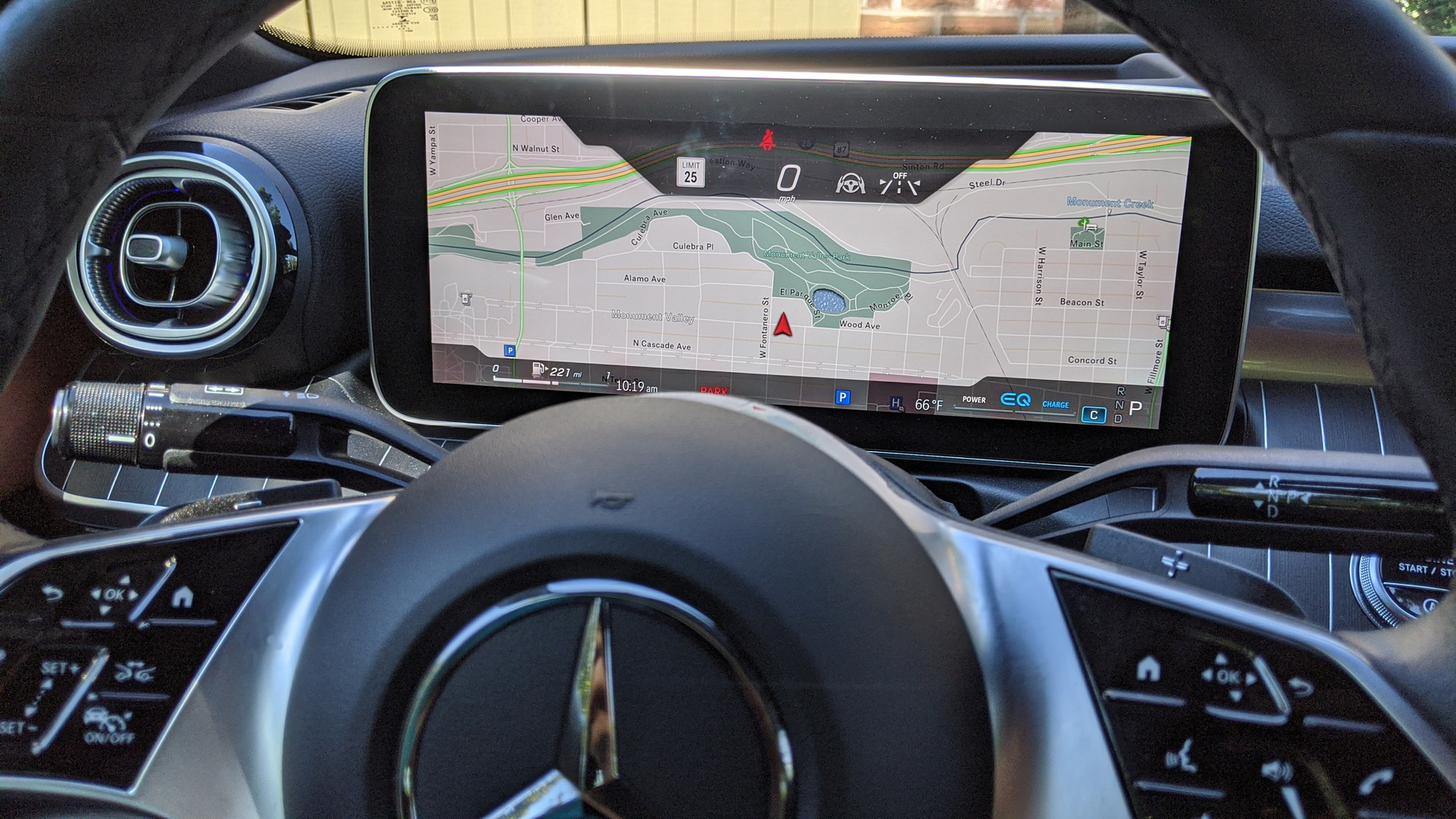 Physical touches to the screen receive quickish responses but the menu system itself is a bit convoluted and hard to follow. Additionally, the capacitive buttons found just below the infotainment screen and on the steering wheel are frustrating to use in practice. Sometimes they don’t react at all while at other times the system senses the touch and seems to overreact.

Thank you, Mercedes has one of the very best voice command systems in the business. Every aspect of it that we tested worked the first time without the need for additional attempts. That doesn’t mean that it was perfect all week. Every once in a while it would ask for us to repeat phrases but overall we found it easier to use than the touch interface itself. It’s especially excellent at providing turn-by-turn navigation directions in part due to the augmented reality applied to the system. 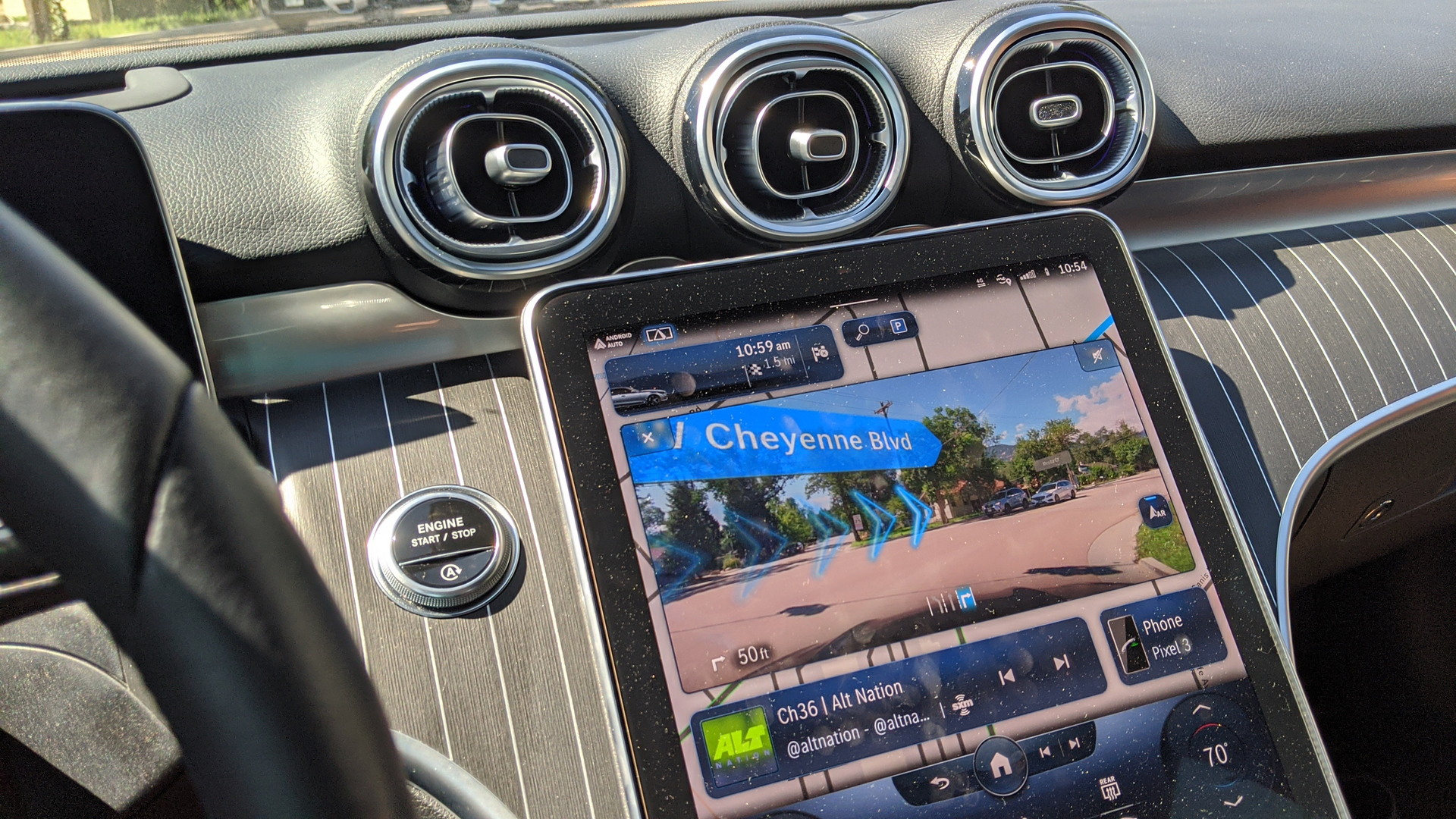 As you approach turns or places where you might need to change lanes the system will show the real road ahead on the main infotainment system with floating arrows that point in the correct direction.

The only thing we’d change is that we’d put that in the heads-up display or limit the AR section to half of the infotainment system as opposed to the whole thing. That way you could see the overhead view of the turn in addition to the AR version. It should also be noted that every once in a while the nav system would make mistakes like the time that it tried to tell us to drive on a closed bike path to get to our destination. 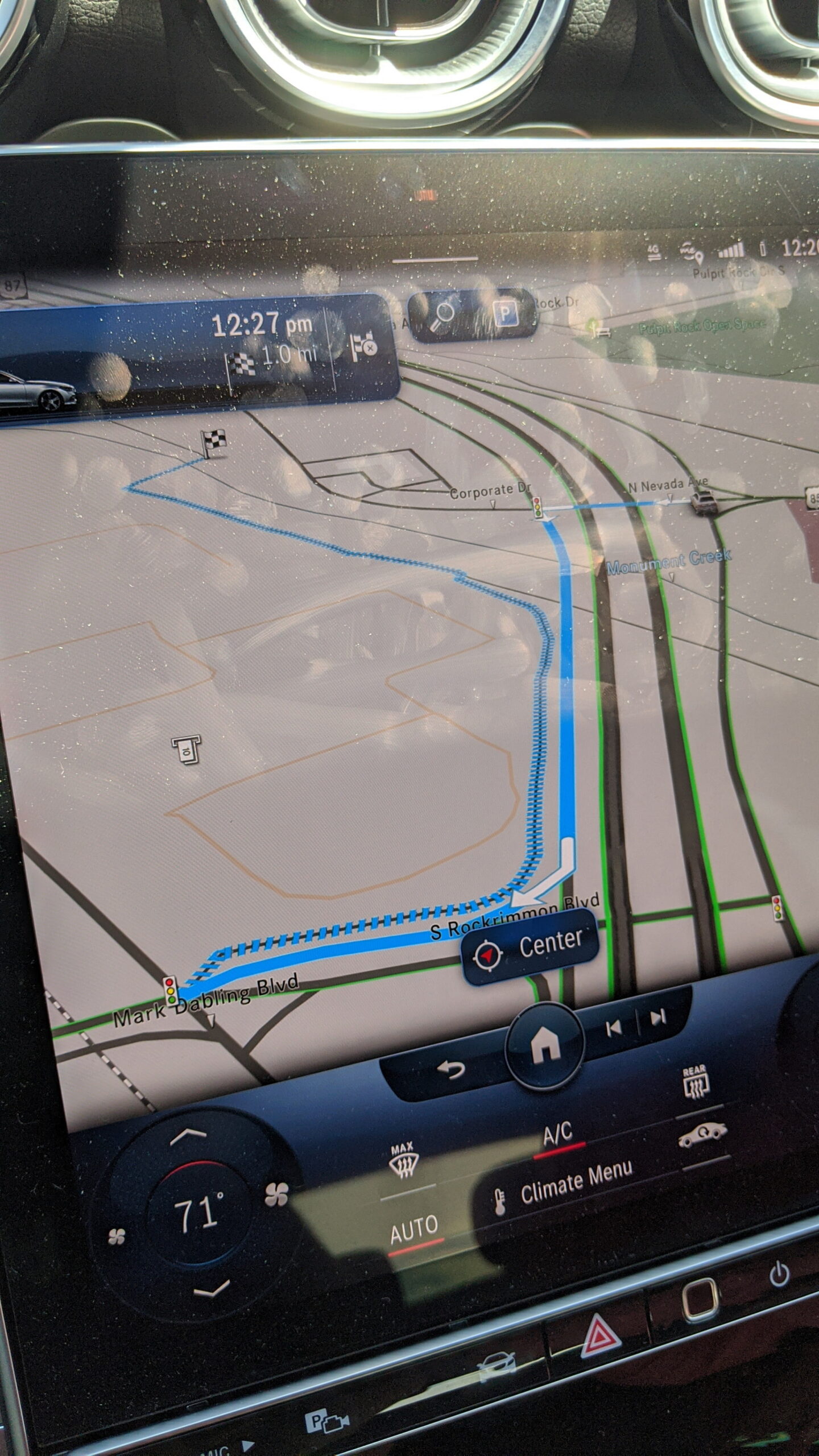 The premium Burmester sound system in the C 300 was fine but we found that it really struggled with bass-heavy music. The rest of the range was great though and the system allows for a lot of adjustment.

The C 300’s automated parking feature was impressive. Once activated the car will automatically scan the roadside for a parking space. When it’s found a space, the interface will ask the driver to engage the actual parking action and then to modulate the brake as necessary. In our testing, it seemed that it struggled to get close to the curb if no parking lines were present. 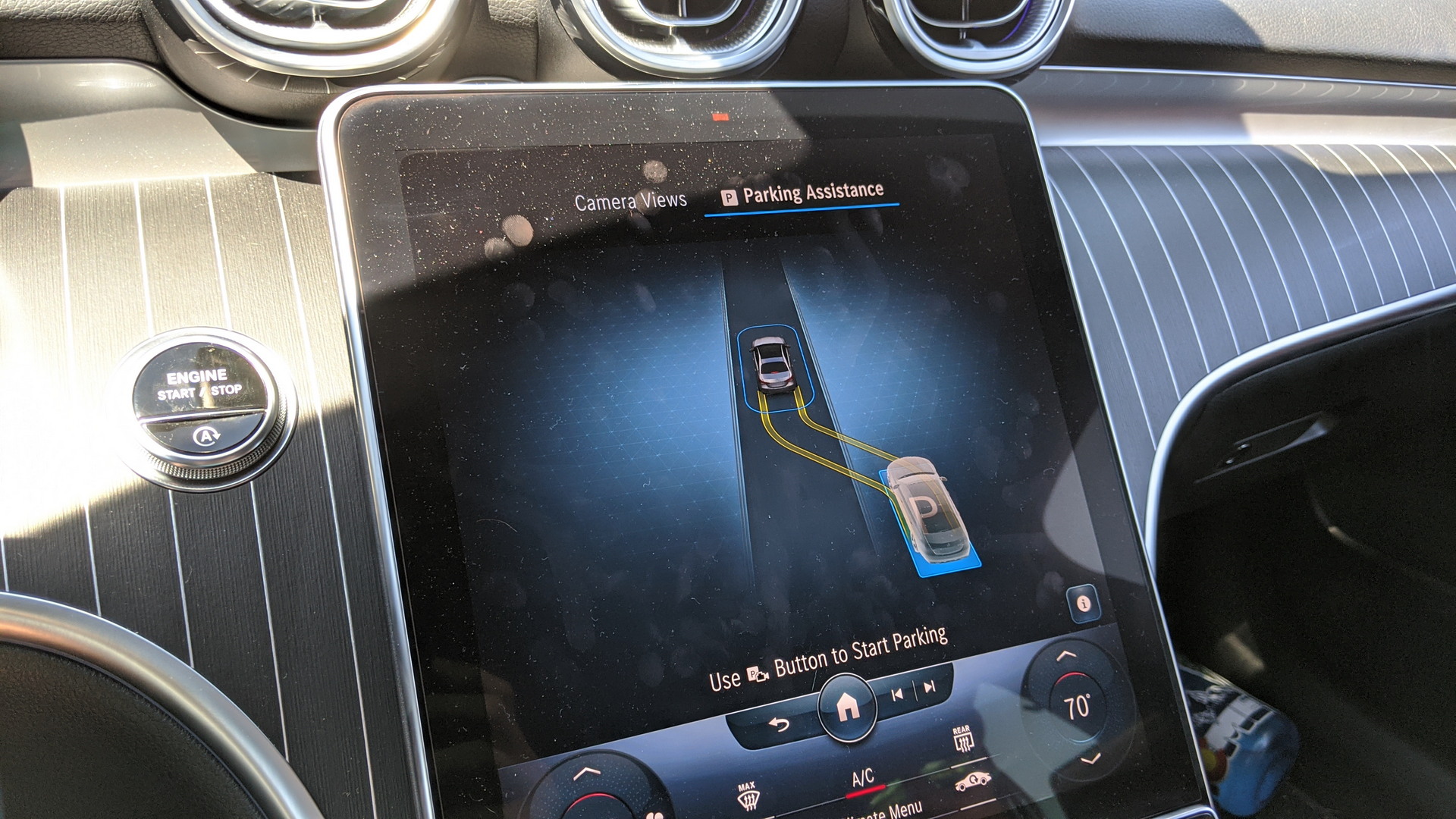 It would still make it into a space but it would leave 18 or more inches sometimes between the car and the curb. If lines were present it was highly impressive. Not only would it put the car about 8 inches from the curb but it would actually pull the car forward in the space to make sure that it’s centered wherever possible. 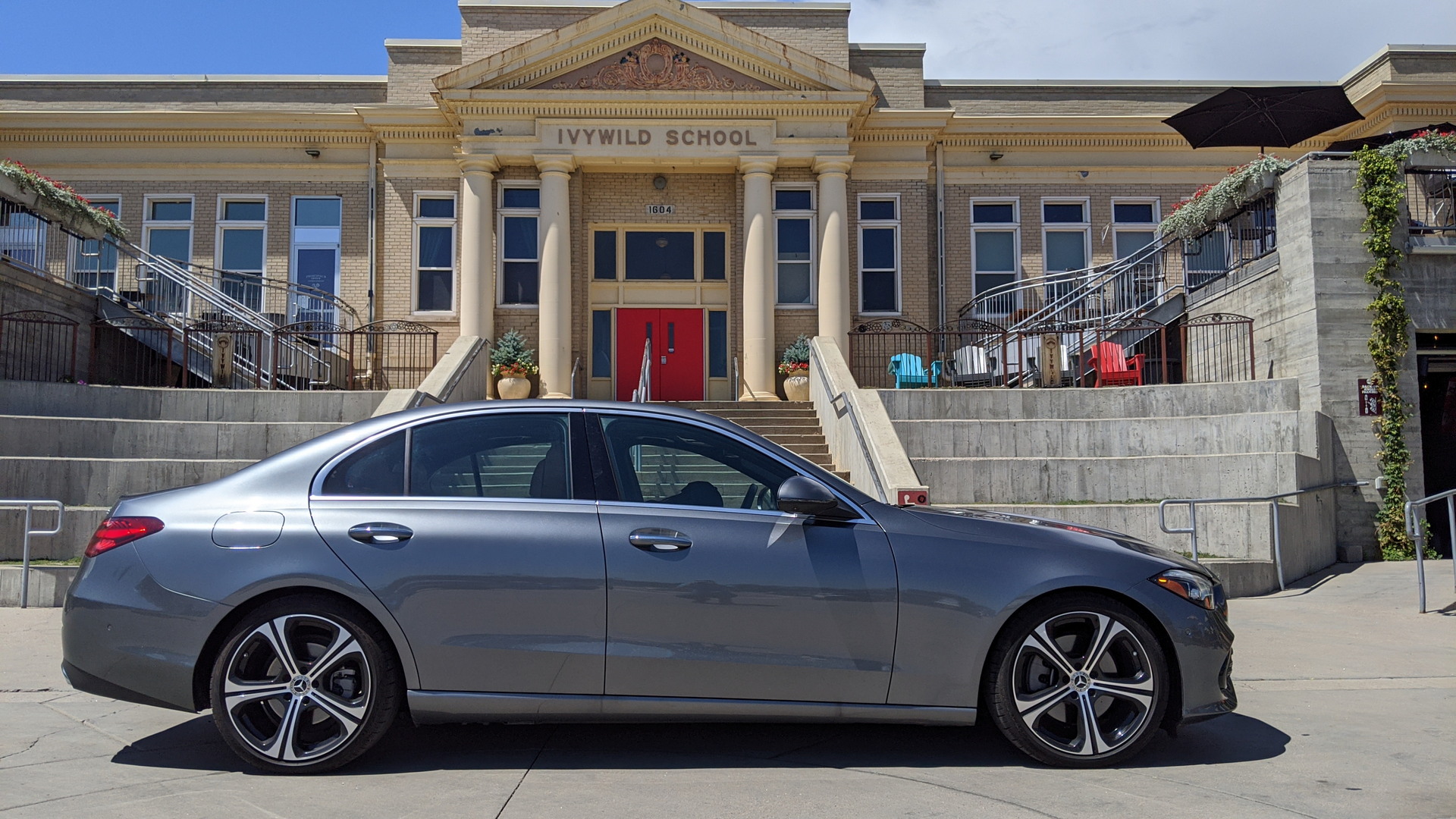 Breaking away from the tradition of its past, Mercedes sells the new C 300 in three different distinct trims and then allows buyers to add additional content in packages or individually. The whole trio of trims can be had in rear- or all-wheel drive (4Matic). 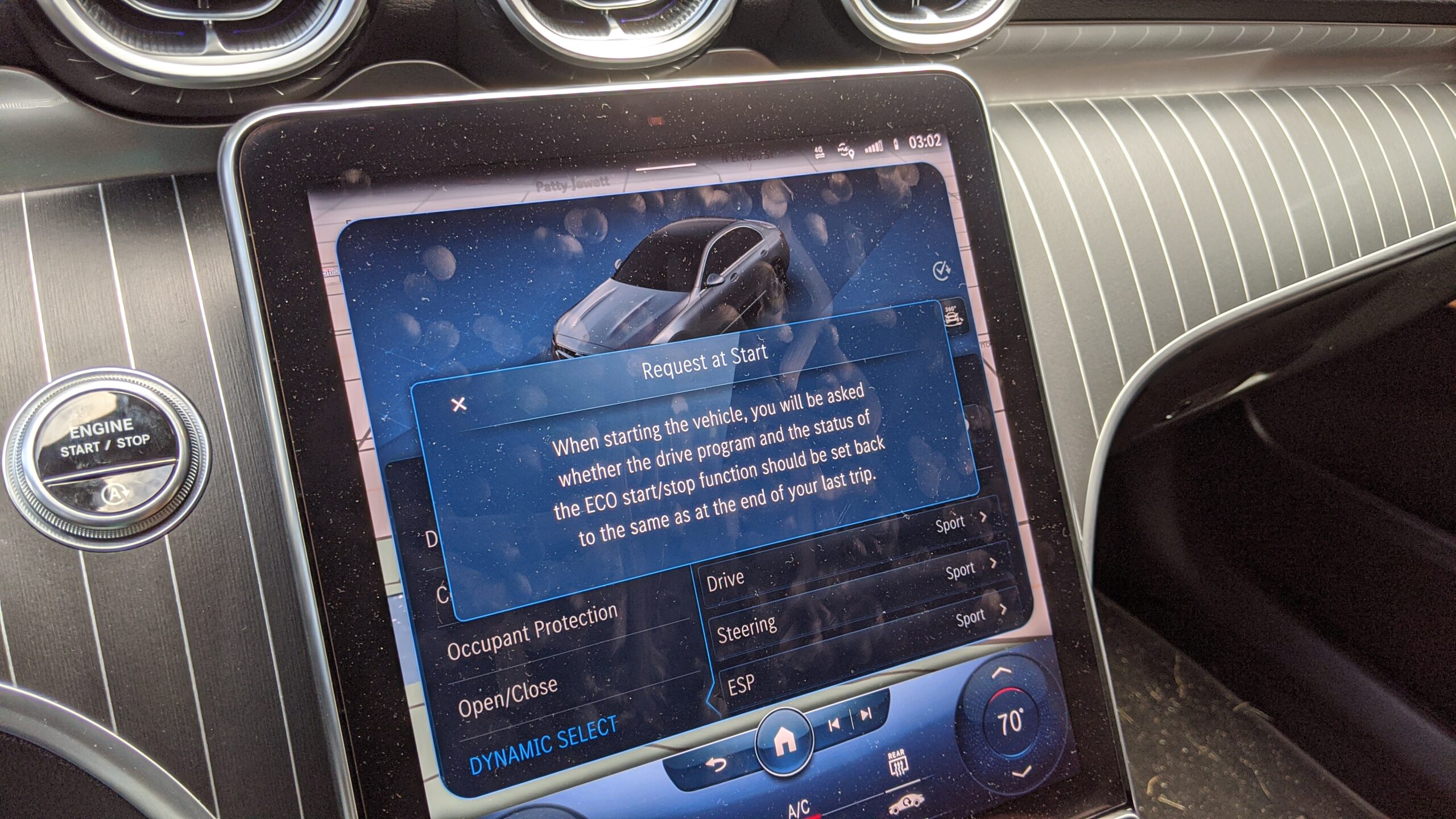 The top trim is appropriately named Pinnacle and it has integrated augmented reality navigation and a heads-up display. The top two trims can add a Driver Assistance package that includes adaptive cruise control, lane-keep assist, evasive steering assist, blind-spot intervention, and more. It starts at $47,500. 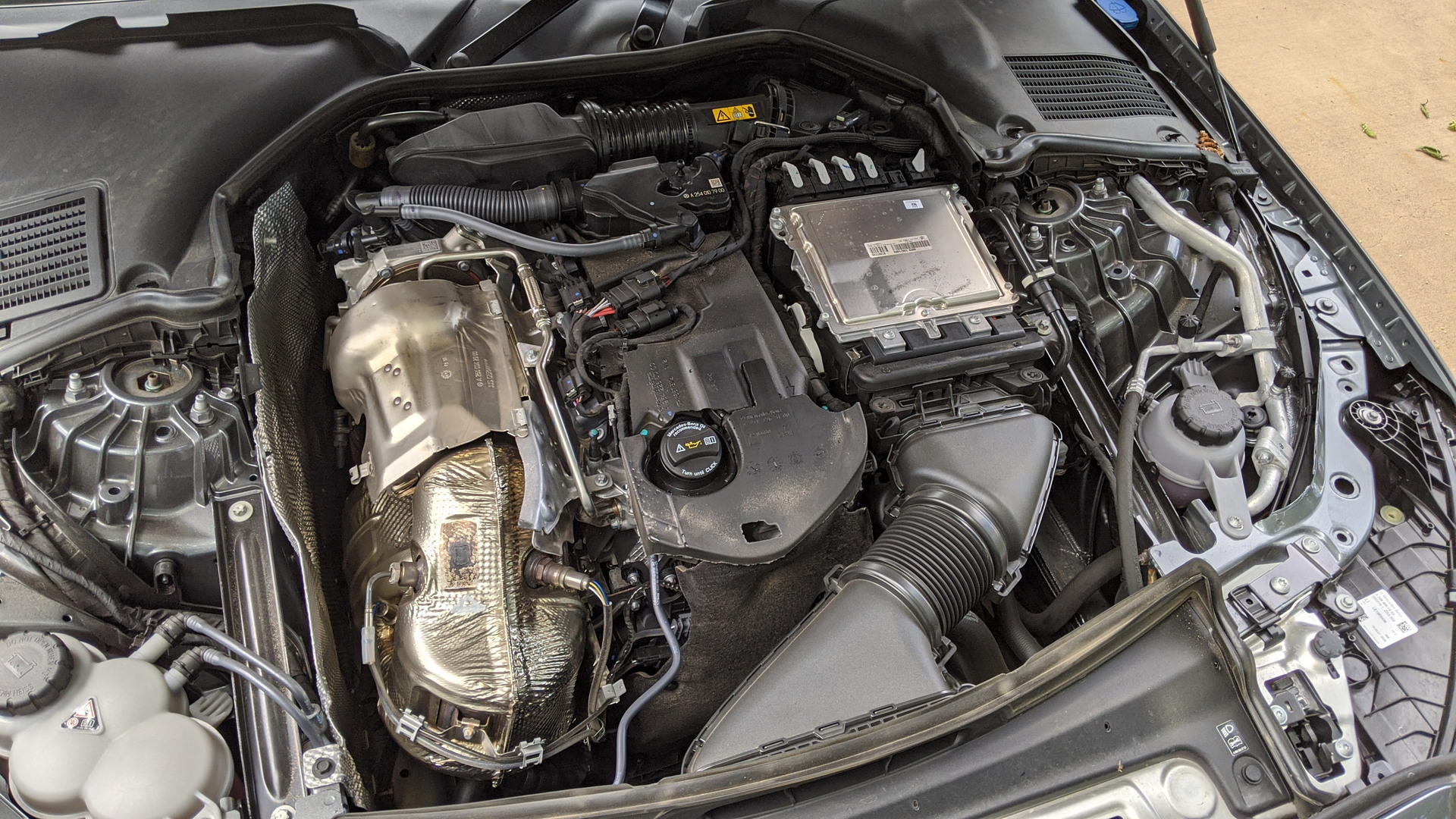 According to the EPA, the 2022 C 300 Sedan can get up to 25 mpg in the city and 35 on the highway. That results in a combined score of 29. The 4Matic version sees those figures drop to 23, 33, and 27 respectively. In our week’s worth of mixed driving, we ended up with an observed 27.7 mpg combined. That’s quite good for this class and easily beats out competitors like the Alfa Romeo Giulia.

When Did Normal Cars Get This Quick? 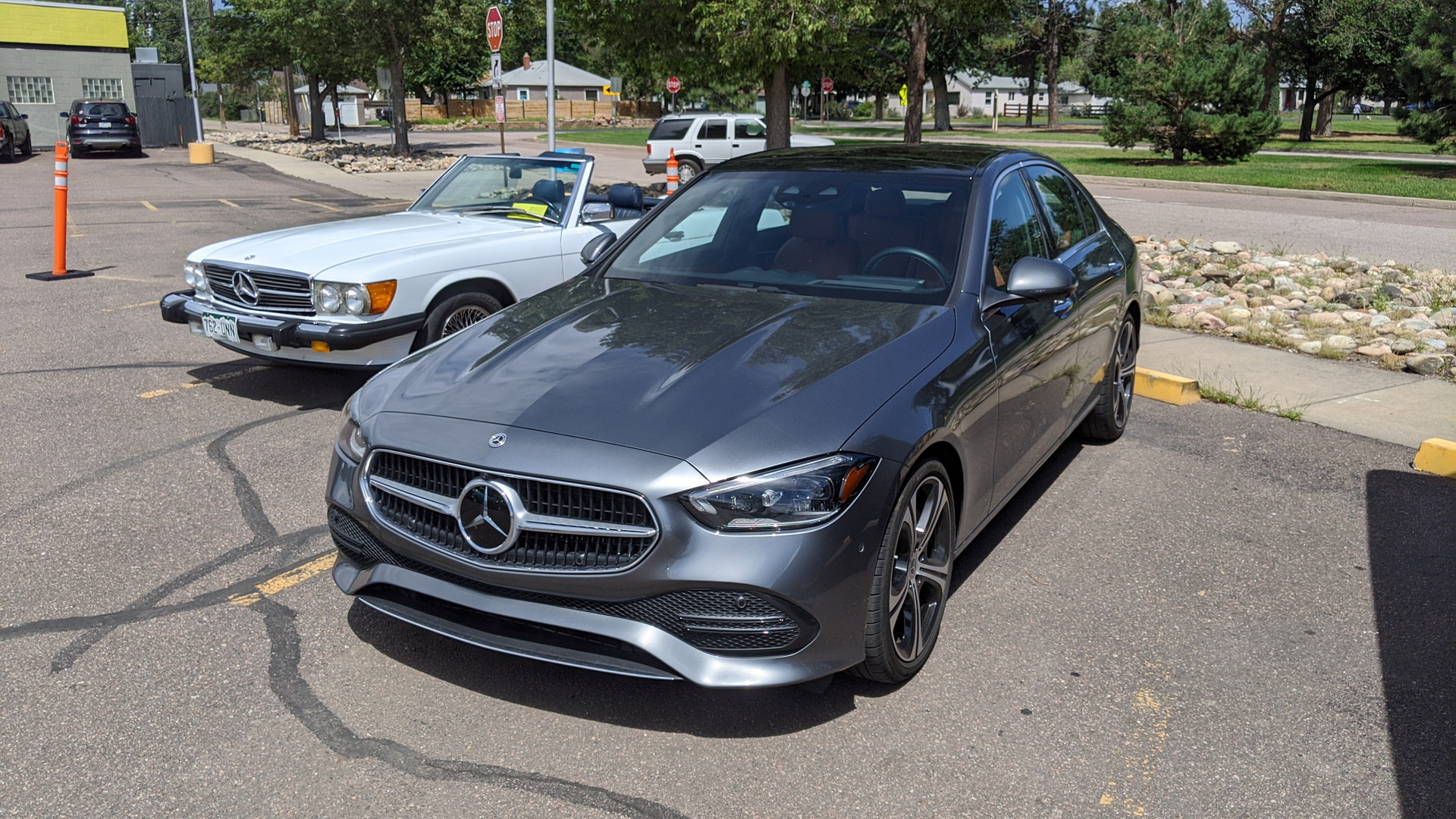 Daily driving the C 300 for a week was a real pleasure. It’s a smooth and comfortable performer in everyday traffic. Both the accelerator and the brake take a couple of days to really master. Once one is comfortable with them it’s easy to adjust speed and braking with a deft touch.

We’re also very impressed by how well the car handled heavy rainfall. Despite serious downpours, it never felt like it was losing traction or poise. We’ll also take a moment to say that the automatic wipers are exceptional. They also required zero interaction from us to do their job.

How would this small sedan fare when things got fast? While 255 horsepower (190 kW) and 295 pound-feet (399 Nm) of torque might not sound like much it’s more than potent enough for the C 300. From a dead stop, it’ll rip from 0-60 in just 5.3 seconds . It would be even faster if the engine didn’t need to spin up the turbo before real power kicks in. 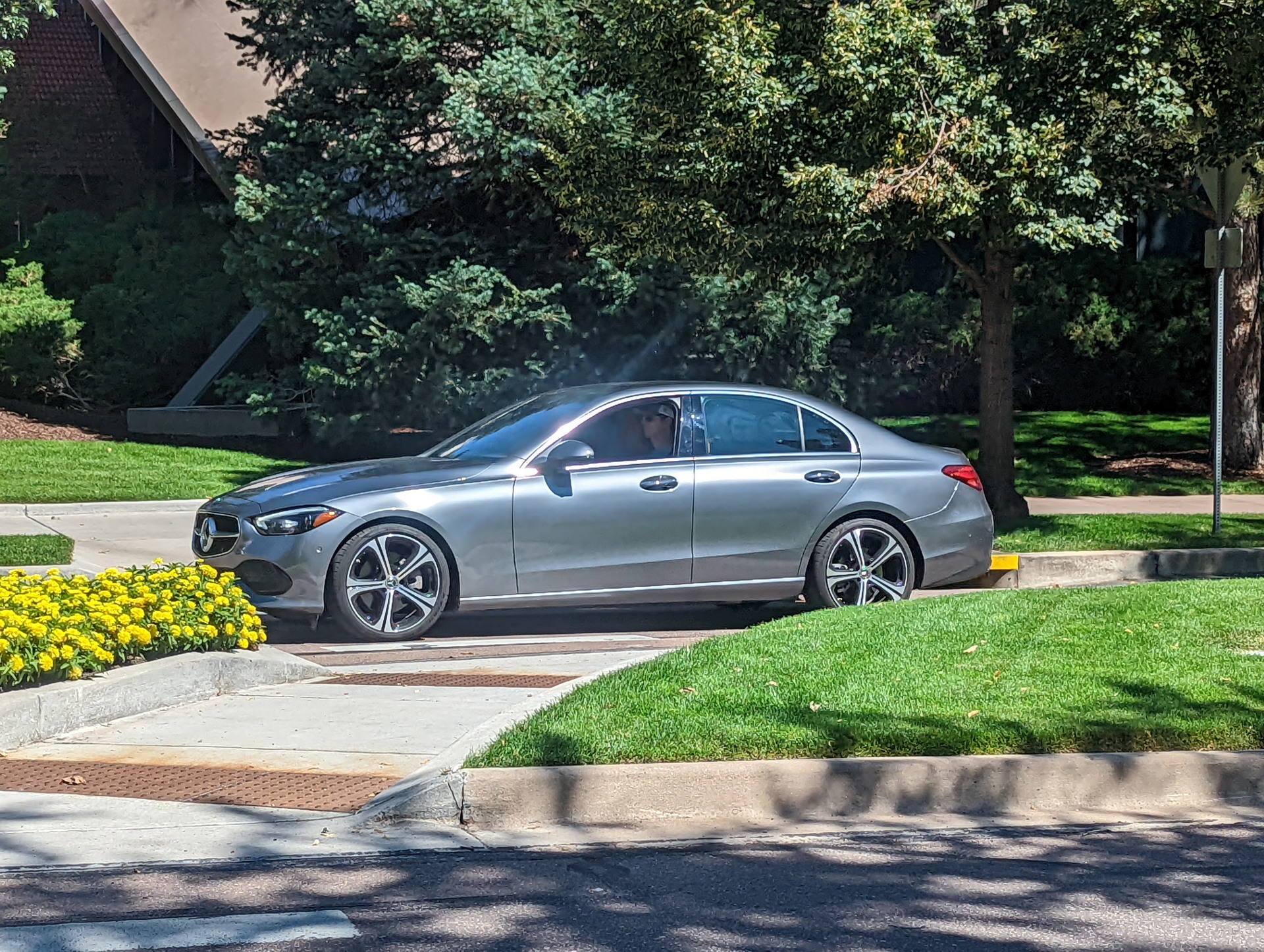 Despite that, the mild hybrid helps out by being able to add up to 20 horsepower in short bursts. Once it’s up to highway speeds the C-Class is a brilliant cruiser and doesn’t run out of oomph either. Triple-digit speeds feel considerably slower thanks to rock-solid construction and a hushed cabin.

One noise that we’re happy about hearing in the C 300 is the engine that has a surprising rasp above 4,000 rpm. Around corners, the C 300 is nimble and confidence-inspiring. Low and high-speed corners are managed with aplomb and accuracy. The wheel and pedals provide verbose feedback about what’s happening on the tires. Ultimately we found the driving experience in the C 300 to be very impressive. 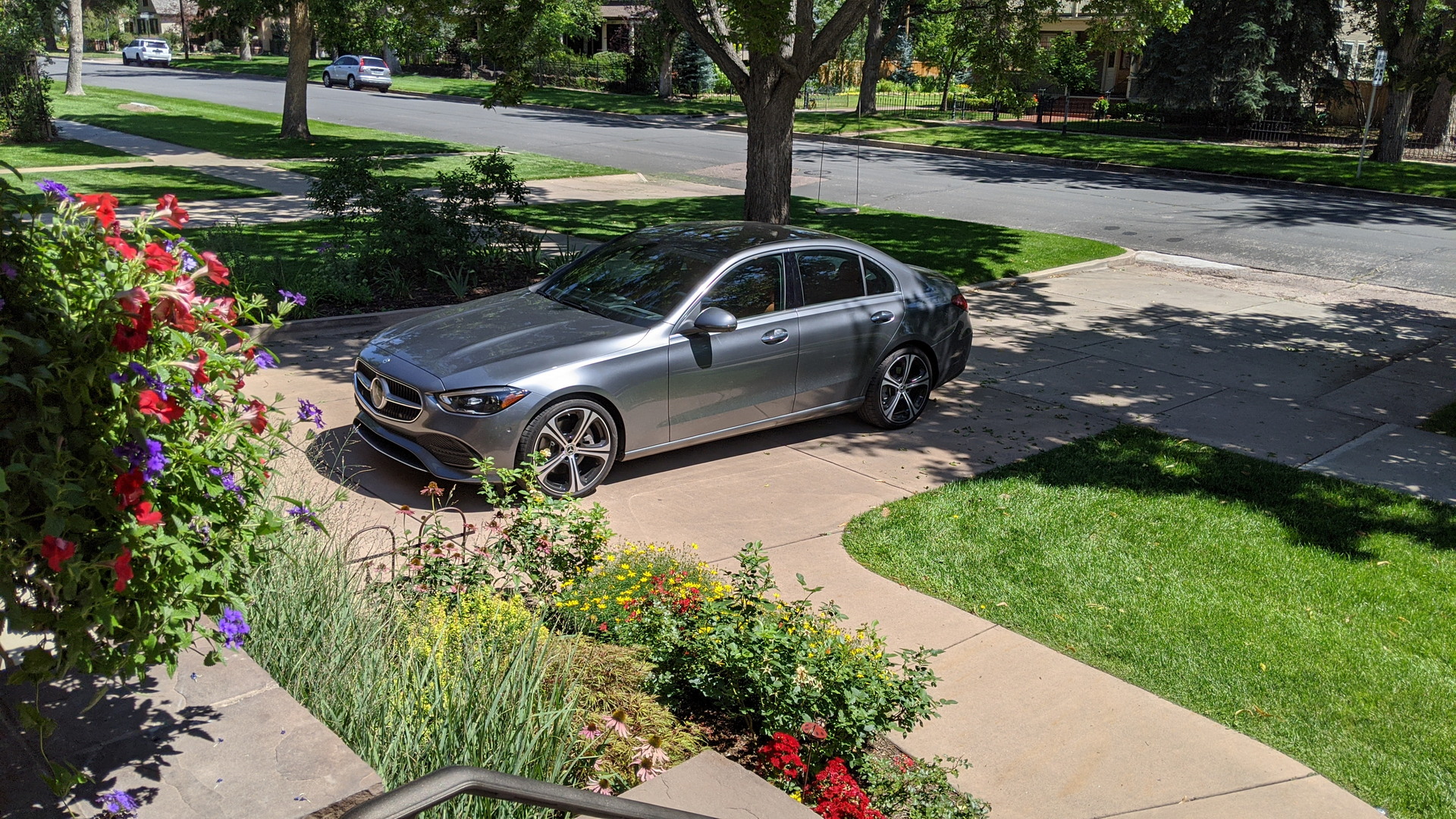 Mercedes is bringing the C 300 to market against a bevy of challengers. The BMW 4-Series Gran Coupe and the Audi A5 Sportback are obvious rivals but they’re no longer alone. The Genesis G70 and the Alfa Romeo Giulia also share this space. In that expanded group, the C 300 feels the most luxurious to us. It’s not as good of a value as the G70 and it’s not as sharp of a performance sedan as some of the others.

Overall though we think the 2022 Mercedes-Benz C 300 is an incredibly competent package of well-rounded features. It’s quick, it’s composed, it’s full of high-end luxury treatments and technology, and it’s competitively priced. We’re eager to see how the C43 and C63 AMG variants raise the bar even further.