The first American has been implanted with a revolutionary new brain-computer interface (BCI) at Mount Sinai Health System in New York City as part of Synchron’s COMMAND trial. This clinical trial represents the first investigational device exemption (IDE) granted by the US Food and Drug Administration (FDA) for evaluating a permanently implanted brain-computer interface.

“This is an incredible innovation in brain-computer interface technology,” said COMMAND Principal Investigator David Putrino, Ph.D., PT, director of rehabilitation innovation for the Mount Sinai Health System, and an assistant professor of rehabilitation medicine at Icahn School of Medicine at Mount Sinai. “I think we’re going to see a lot of people following suit because it’s a novel way of accessing and recording brain activity.” 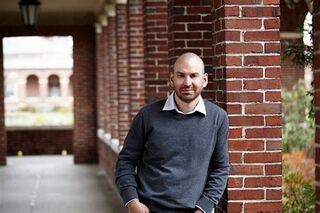 Putrino is one of the principal investigators of the clinical trial working in collaboration with Doug Weber, Ph.D., at Carnegie Mellon University, and Tom Oxley, MD, Ph.D., CEO of Synchron. Putrino is a neuroscientist, and his Ph.D. was focused on motor control and understanding the neurobiology of motor control, so how to operate control of movement, learn about voluntary movement, and recovery from brain injury. When he completed his Ph.D., he started exploring the roles of brain-computer interface in helping veterans recover from paralysis and loss of limbs.

“Although I was doing a lot of research in this space, I was not particularly impressed with the ability of the current brain-computer interface technology to make a meaningful impact on someone’s life mainly because most of the technologies that we were working with do not really leave the lab,” said Putrino. “You could have a Utah Array implanted, but you could only use that array in the lab environment. When you got home, the brain-computer interface is switched off. I’m a very action-oriented, pragmatic clinical trial researcher, so I moved a little away from brain-computer interfaces and focused on technologies to help people recover from paralysis. But when Synchron came along, I was impressed with the ability of the technology to move straight into independent home use. So, I reached out to Tom.”

Tom Oxley founded Synchron, a neural interface technology startup in 2016 with CTO Nicholas Opie with investors that include Max Hodak and Khosla Ventures. Oxley completed an endovascular neurosurgery fellowship at Mount Sinai Hospital in New York and has performed over 1,600 endovascular neurosurgeries and has published over 100 peer-reviewed scientific papers.

The goal of this clinical trial is to evaluate safety and efficacy. “The goal of implanting the next six individuals in the United States is to make sure there is no adverse effects from the implant and to make sure that individuals with severe disabilities can feasibly get meaningful signal from their brain as they attempt movements,” said Putrino .

All five patients have ALS (amyotrophic lateral sclerosis or Lou Gehrig’s Disease), a progressive and fatal neurodegenerative disease without a cure where motor neurons die, impacting the ability to initiate and control muscle movement. Those with ALS lose the ability to speak, walk, move, grasp objects, swallow, and eventually breathe. The average life expectancy of ALS patients is between two to five years, according to the ALS Association.

The process of implanting the Stentrode is a minimally invasive endovascular procedure. “The first participant in the United States was able to be discharged home within two days,” said Putrino. 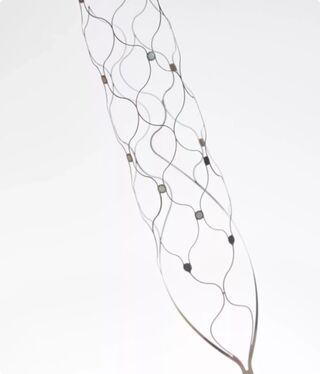 The Stentrode is introduced into the body via the jugular vein and then guided through the transverse sinus, apart from the jugular that crosses the side of the neck to the midline, to the superior sagittal sinus, a large vessel that fits between both hemispheres in the brain. After the Stentrode is placed securely, it is plugged into a device in the chest that resembles a pacemaker that can be charged by an external unit. An external receiver connected to the chest device transforms the brain activity into commands and wirelessly transmits the commands to a computer. This process enables patients to operate external devices such as a computer for activities such as communication, social media, online banking, e-commerce, and more daily functions.

The Synchron implant itself uses the brain’s signal for attempted movement to power the brain-computer interface. The way it works is when the patient thinks about movement, the implant’s recording technology will be able to identify that something has lit up in the brain. The artificial intelligence (AI) machine learning algorithms that are being trained on the data from the implant learn over time to associate brain signals with different computer commands.

“What is exciting and encouraging is that signal quality does not attenuate over time, which is what typically happens when with things like the Utah Array; you lose signal quality over time as tissue scars over it,” said Putrino. “If anything, the Stentrode signal quality improves a little over time as the stent becomes more stable in the blood vessel that it is located. In terms of its potential as a chronic long-term implant, I would say that it’s an exciting improvement over the problems that we faced with implantable electrodes in the past.”

“When you’re first testing out something, you want people to be able to easily communicate with you if something is not feeling quite right or going wrong,” said Putrino. “So those individuals were not completely paralyzed. The first individual that we implanted in the United States as well as every other individual that we will implant in the United States will have complete paralysis of all four limbs and will likely have no other mode of verbal communication. It’s a little bit more challenging, but we will learn about the true utility of the technology.”