This story includes a speculative rendering of the upcoming performance-focused Opel Astra variant created by Thanos Pappas for CarScoops that is neither related to nor endorsed by Opel / Vauxhall.

Opel and Vauxhall have stepped out of the hot hatch game in the past decade, after discontinuing the OPC variants of the Astra and the Corsa. However, this is going to change in the future, as the companies will soon launch a performance-focused version of the upcoming fully electric Astra-e.

The news was revealed to TopGear by Mark Adams, head of design at Vauxhall. More specifically, when asked about the possibility of an EV hot hatch, the design boss replied: “Yeah, we’re working on things that are not too far away, where we’re gonna be embarking in that direction”. The publication suggests that the automaker is planning a warm-hatch PHEV with increased power output, and a hot hatch EV.

In terms of styling, the hotter Astra will most likely be differentiated to some extent from the lesser models, with Mark Adams saying that the current design language “could include a sportier interpretation”. The designer added that “there’s a fine line between being perceived as sporty and dynamic, which is a positive attribute, let’s say. But at the same time, you don’t necessarily want a brand that’s harsh and aggressive. It’s finding that sweet spot, and we have to, as designers, definitely think about those softer factors”.

We guess that styling updates for the hot hatch could include version-specific alloy wheels, special badging, and revised bumpers, communicating the performance credentials. We don’t know if the hot hatch will be called OPC / VXR or GSi, but chances are Opel will go with the former. 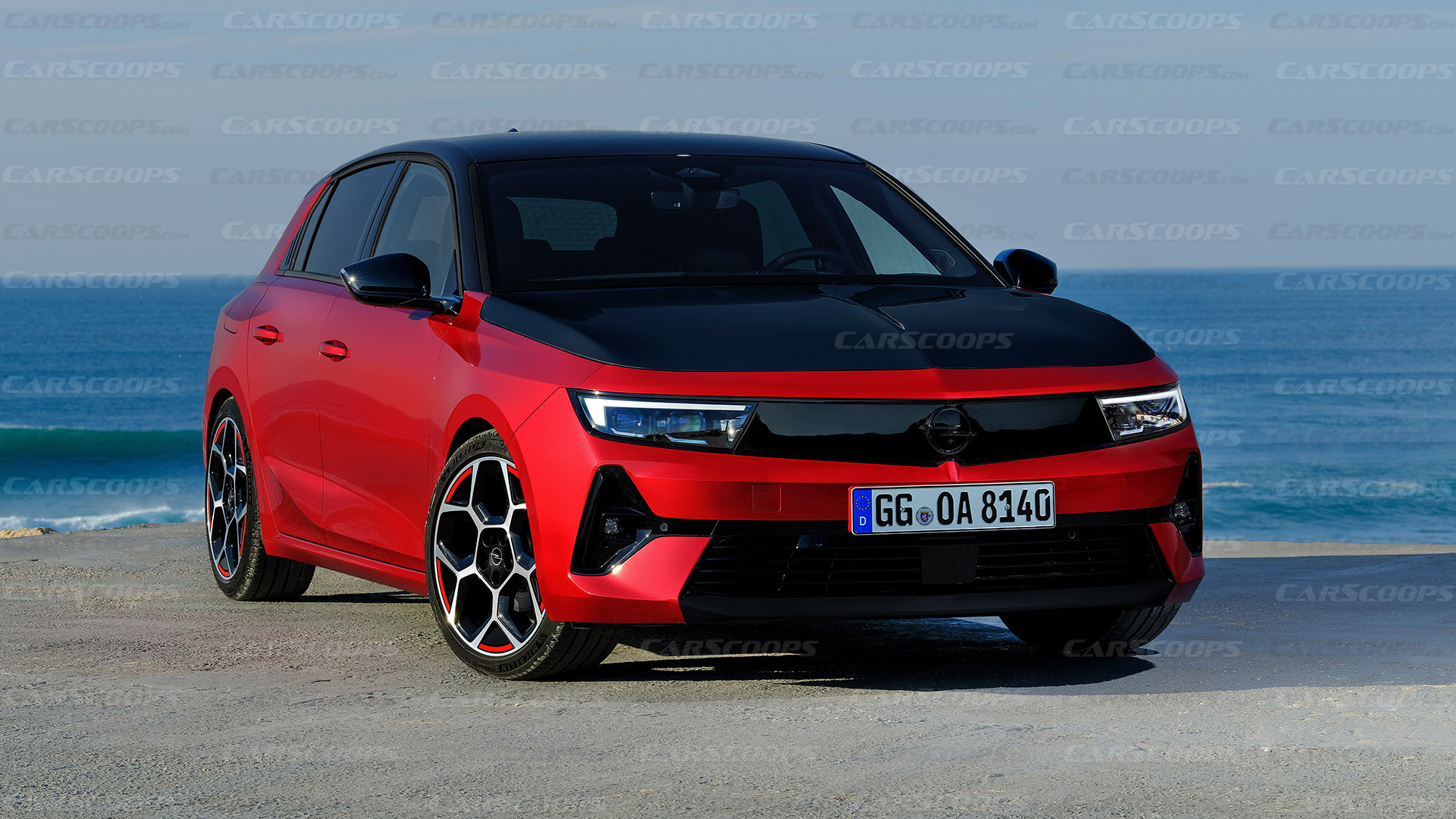 In our exclusive rendering above, we went for a subtle approach based on the GS-Line trim which is the sportiest-looking of the current range. We brought the hatchback closer to the ground, added a covered grille that will most likely be the case in the fully electric Astra-e, changed the color to a darker red tone, and added more black accents.

Opel is known for incorporating a duo-tone treatment to its new models, so besides the roof and the mirrors that are already black in the GS-Line, we also painted black the car’s bonnet and a portion of the front bumper. Note that the automaker recently revealed a modified Astra plug-in hybrid in a quest to showcase its tuning potential with air suspension, motorsport-inspired decals, and 20-inch alloy wheels, but all those features are too much for a production model.

What About The Underpinnings? 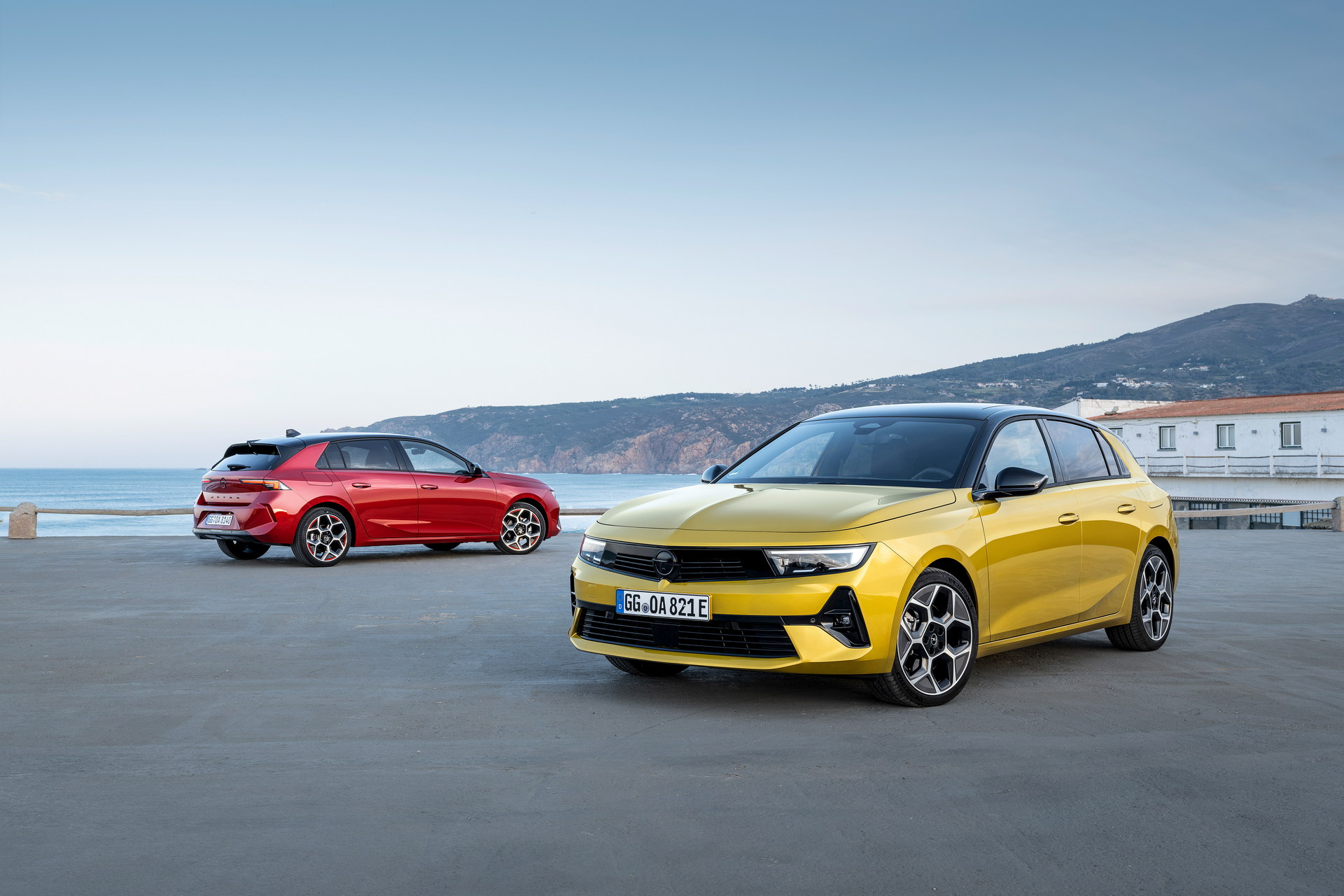 Last year, Opel officially confirmed that a fully electric variant of the Astra is coming in 2023, joining the ICE-powered and Plug-in Hybrid models in the lineup. This is made possible by the flexibility of the latest version of Stellantis’ EMP2 platform, allowing models with different powertrain types to be produced in the Russelsheim plant in Germany. The same applies to the Peugeot 308 sibling which is also getting an EV version soon, although it is not clear if Peugeot will offer something sportier.

Interestingly, Opel has also confirmed an OPC / VXR variant of the Opel Mokka-e for this year. This would not feature an increased output since the electric powertrain already offers great acceleration figures, but Opel will improve performance “in other ways”, possibly referring to a sportier chassis setup combined with more aggressive styling.

We guess that a similar strategy could be applied in the Opel Astra-e, although if the automaker wants to catch up with the competition, they will need to add a few extra horses compared to the regular Astra-e. The best scenario for OPC fans would be a powerful dual-electric motor layout, combined with a track-focused suspension setup and larger brakes. However, times have changed since the ’00s and people are not so eager to sacrifice comfort for performance. This makes us believe that Opel will most likely take a less hardcore approach in terms of sportiness and driving dynamics.

In any case, we expect to learn more about the extended Vauxhall / Opel Astra range sometime in the coming months. Besides the hot hatch and the new EV powertrain, there are rumors for an upcoming crossover-style variant of the Astra following the introduction of the more practical Sports Tourer estate that is already available in Europe alongside the hatchback.